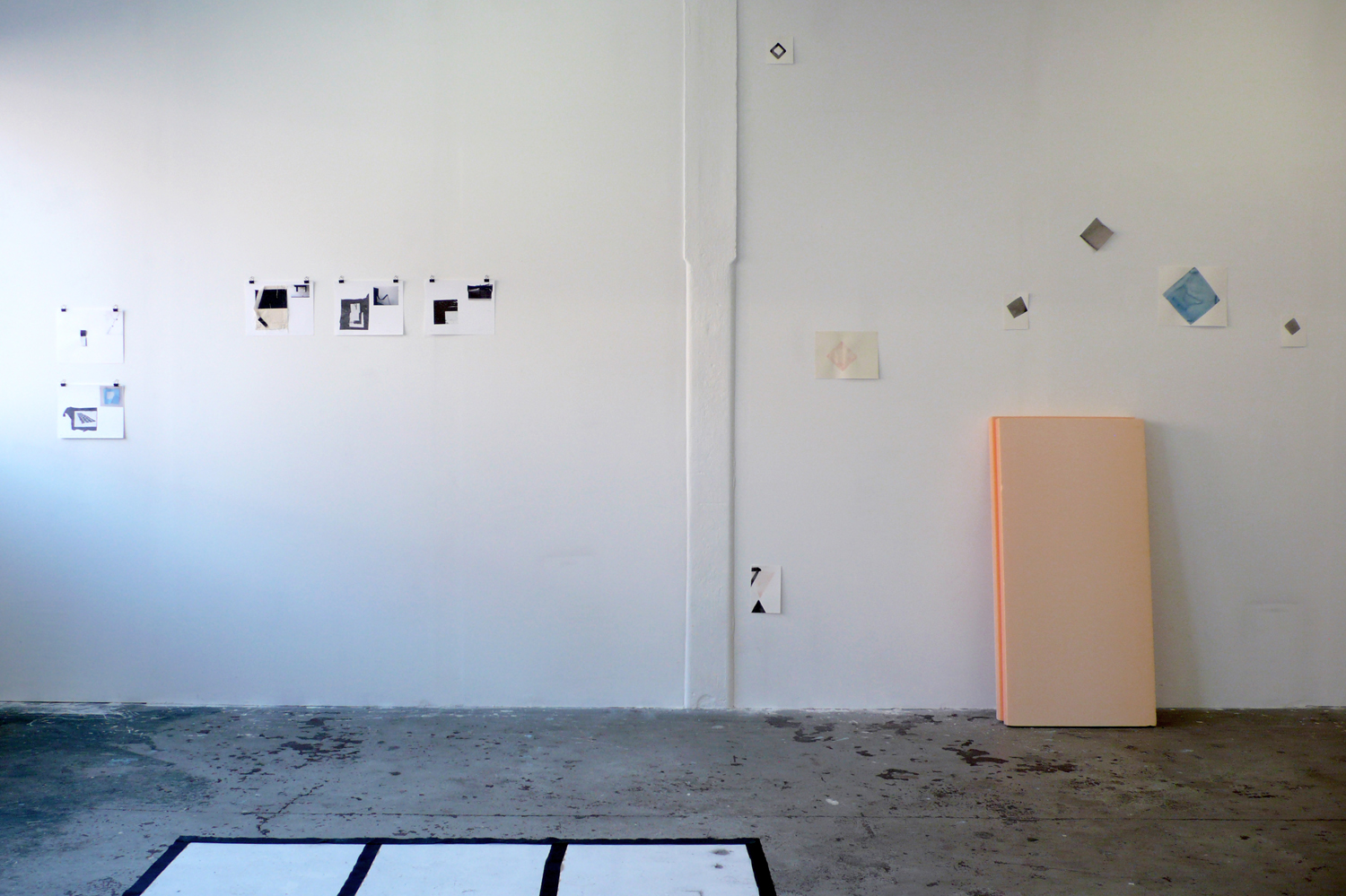 As well as being shown together for the first time, the exhibition ee/aa marks Venezuelan artist Eugenio Espinoza’s and Norwegian artist Margrethe Aanestad’s introduction to the Danish art scene. Despite being unrelated in terms of background, culture and generations, the artists share a language of minimal, geometric abstraction and the close to, yet still, im-perfect. They are also linked in their approach – the way they form, collect and compose in an exchange between intent, intuition and chance. In creating serial works that appear close in time, by revisiting earlier work and recurring themes or by referring further back in time to traditions within art history, both artists seem to insist on exploring timeless forms through repetition and reinvention. By exhibiting Espinoza and Aanestad together, we wish to present their distinct preoccupations, but also bring out a sense of repetition and difference, that not only link the two, but resonate with a history of artistic obsessions and constant redefining of universal themes. 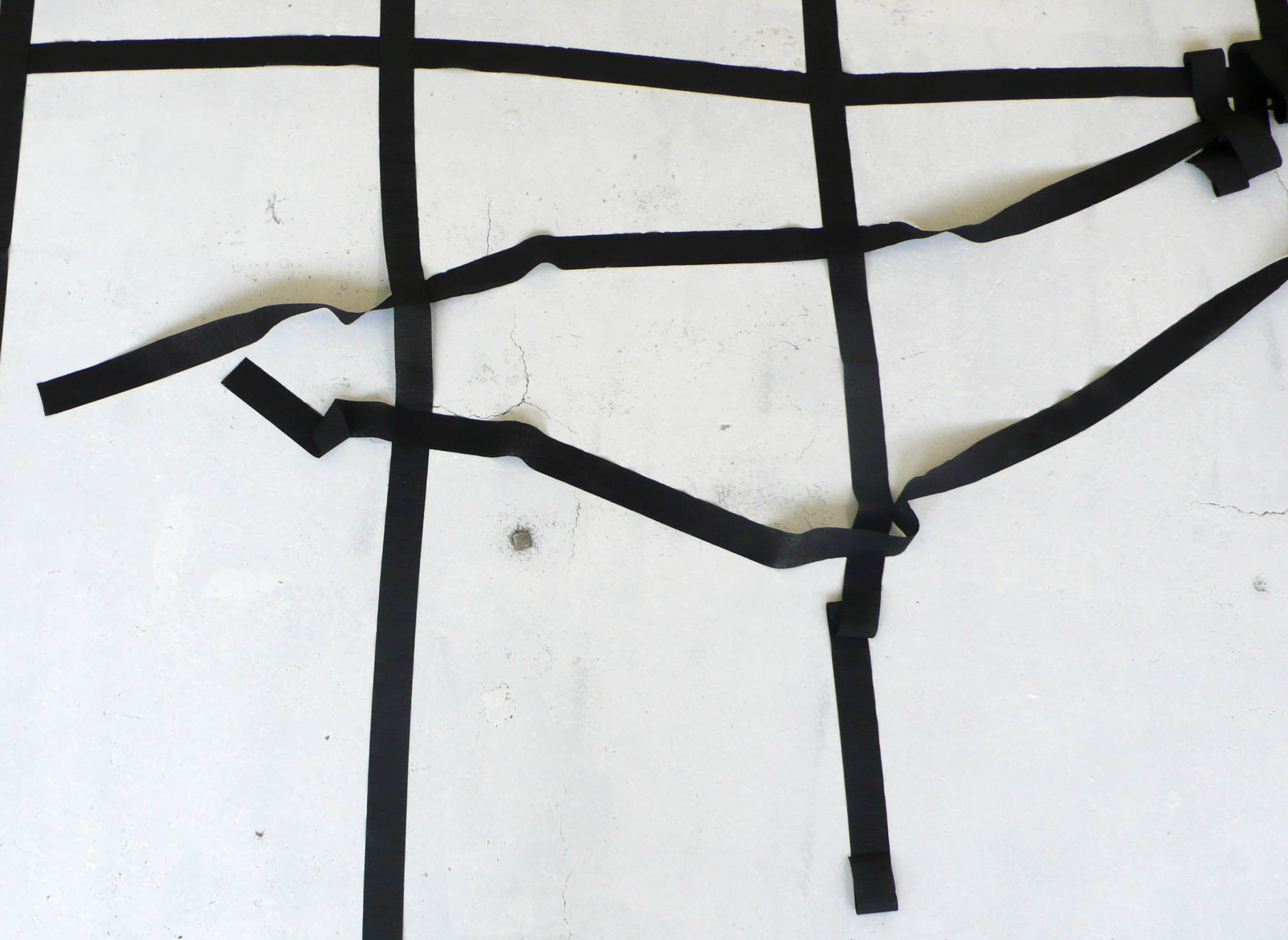 The black-and-white grid, with its associations to both modernist painting and architecture, is recurrent in Espinoza’s work. But the rigid grid is often distorted in his representations on soft materials or split and bended surfaces. For this exhibition Espinoza has created a new floor work. A white painted square with a missing corner forms an L-shape on the floor, which is covered by black paper ribbons laid out in his familiar grid. The viewers are invited to literally walk over the piece, changing the loose ribbons’ placement by their movements. This way of experimenting with form in opposition to the strict minimalist vocabulary illustrates Espinoza’s playfulness and draws a clear line to artists such as Robert Morris and his work with chance. External factors specific to our site and the interaction by the viewers creates an element of unpredictability; a gust of wind from the door or a visitor’s movement can affect the works appearance dramatically. This shifts the focus from the form to the performative quality of indeterminacy and thus gives the subject status as co-producer of the work. People familiar with Espinoza’s body of work will immediately recognize the floor piece’s relation to some of his earlier works such as Impenetrable and Negativa Moderna. Whereas Impenetrable closed off the whole room, forcing the viewer to stand outside it and look in, Negativa Moderna created a gigantic grid on the floor pieced together by endless rolls of canvas. The re-visiting of earlier works through new production is also reflected in a selection of collages shown in the exhibition. Here, Espinoza juxtaposes representations of new and older works, re-enforcing them with new meaning and actuality. 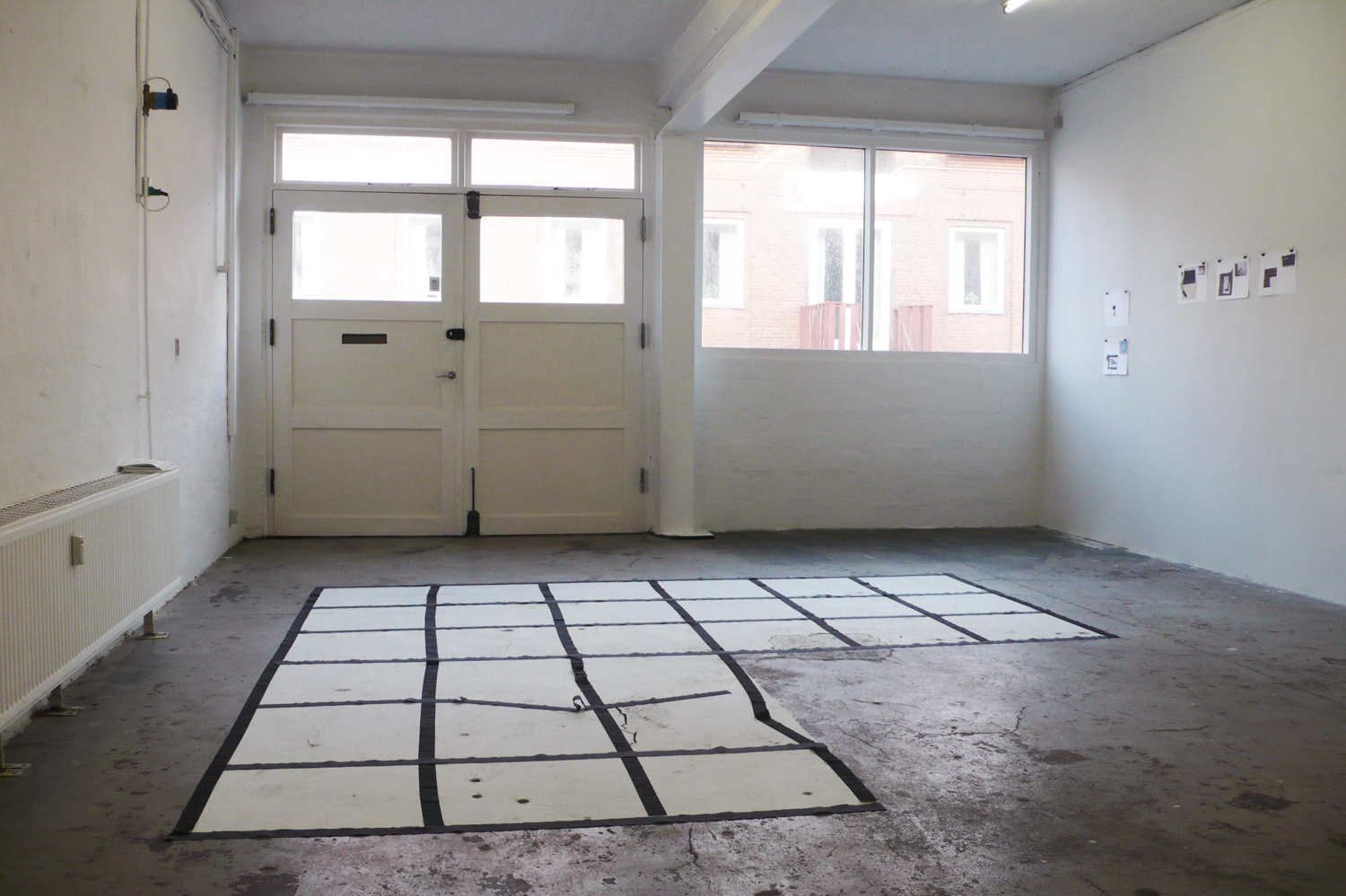 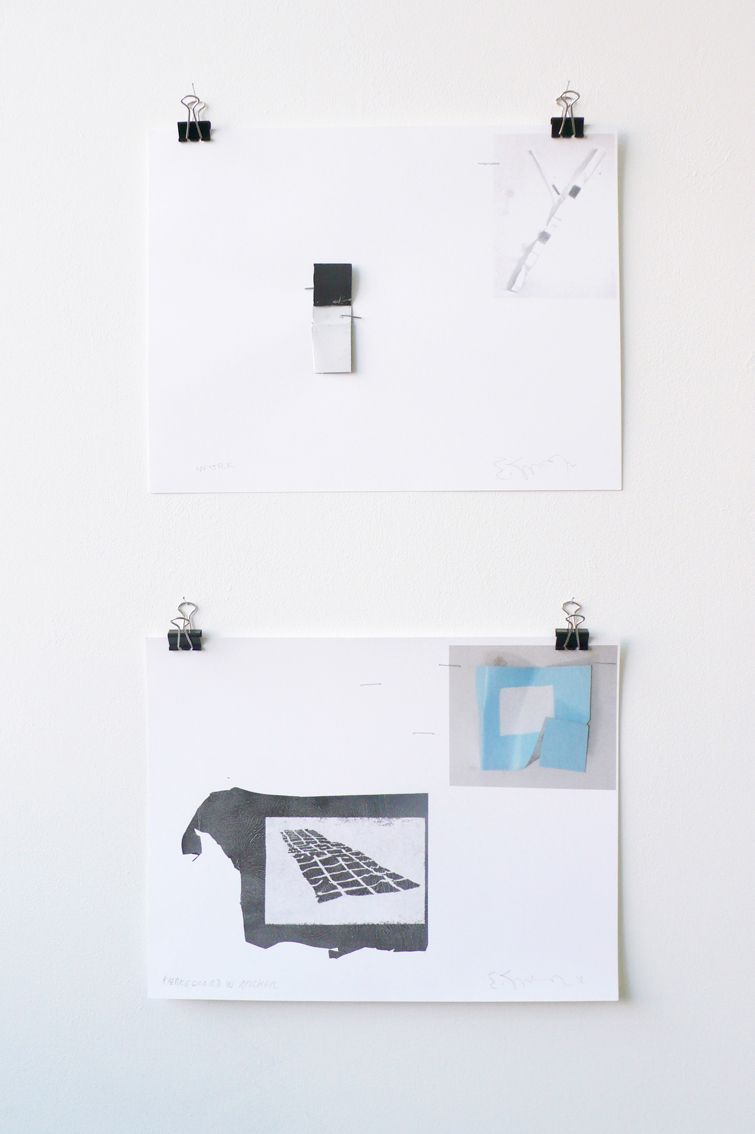 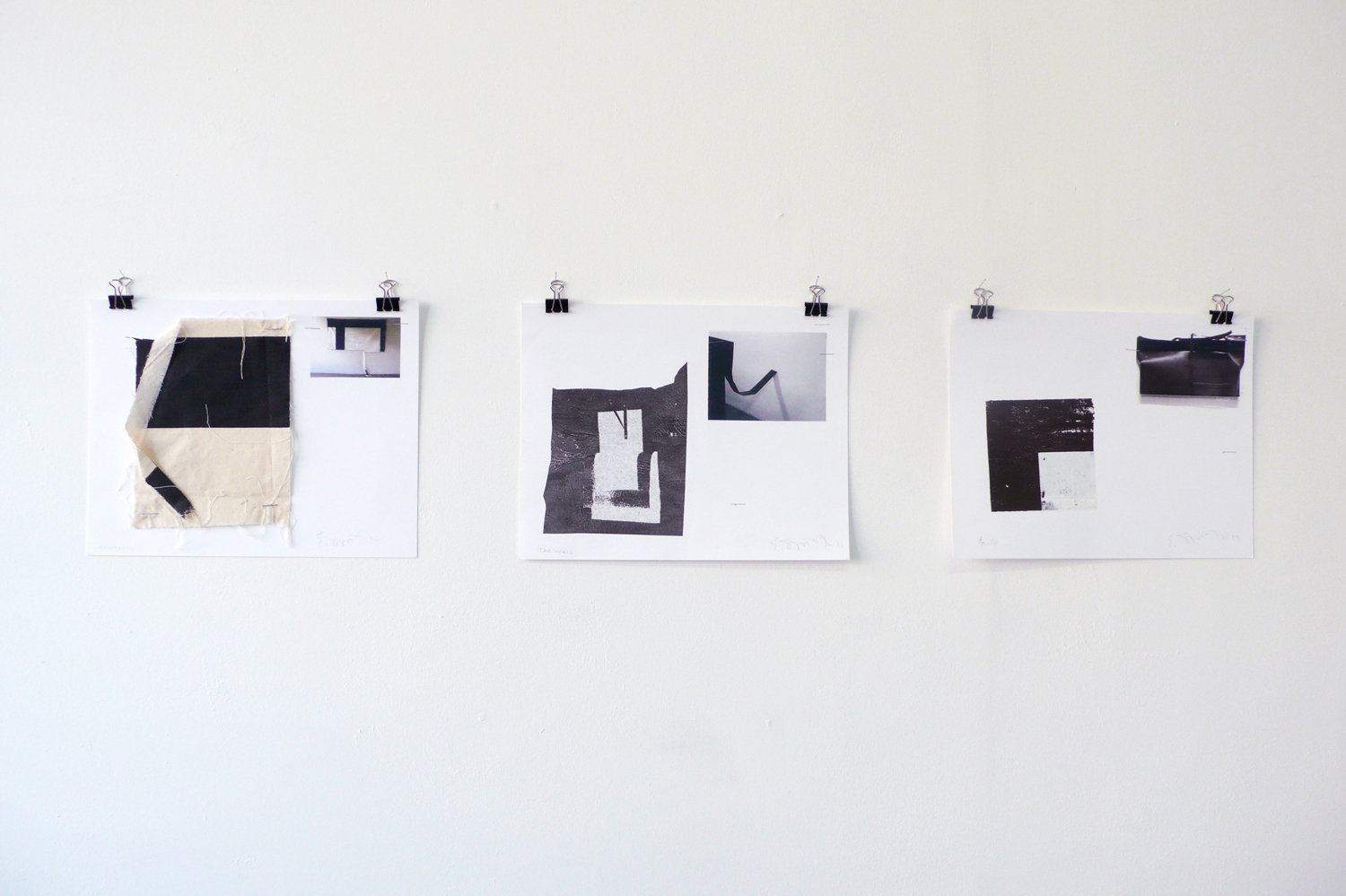 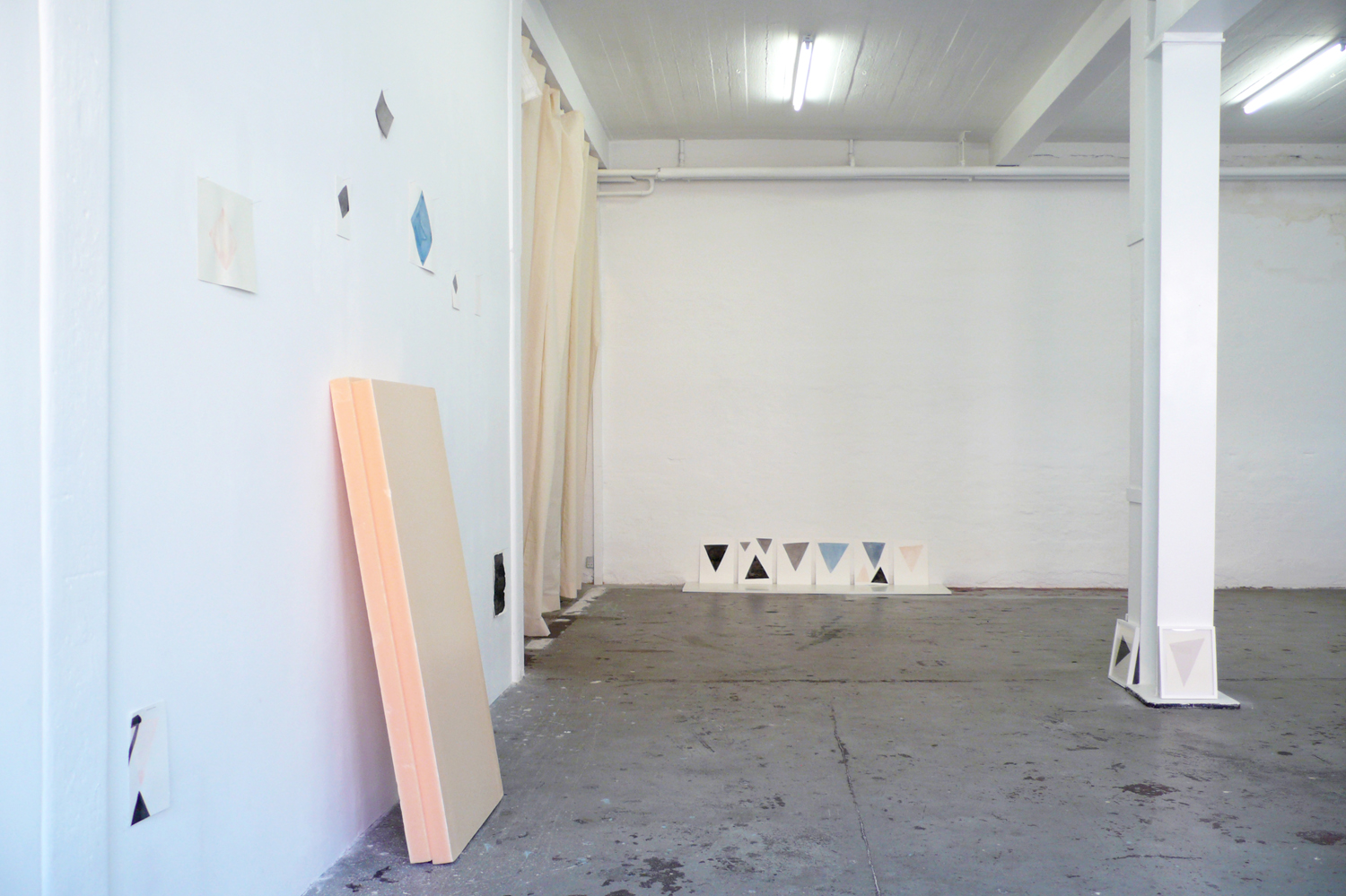 Aanestad’s simple shapes are drawn and redrawn, but rather than repeating to achieve perfection, her attempt is to define the intangible. With squares and triangles she builds up meditative spaces and atmospheres. She wishes to capture a sense of spirituality that she finds in her main source of inspiration; the ways in which the immaterial and changeable light meets physical spaces, both in nature and in architecture. Her geometric forms are drawn by freehand and evoke alternative representations of space and perspective found in byzantine and early renaissance art. Thus, the spatiality in her works should be understood symbolically rather than logically; space is created through the placement of form on the surface, not by lights and shadows or understandings of depth. Staying true to the motif, Aanestad moves through different techniques in her practice, and in this exhibition shows new works using brush with watercolour and ink. In comparison to her works made with coloured pencil, the investigation here becomes more focused on a balance between control and the uncontrollable. The unpredictability and speed of the process subject the planes to more varied degrees of intensity and transparency, and give room for happy accidents. The feeling of something that is slightly off, never too harmonious, is also evident in the way the works are grouped and installed in the exhibition space. Her drawings are mounted directly on the wall and floor, together with collections of larger found objects and materials. The paper becomes an important and active spatial agent, quietly insisting on its own presence as the drawings transcend the two-dimensional format and become finely tuned sculptural and architectural objects in themselves. 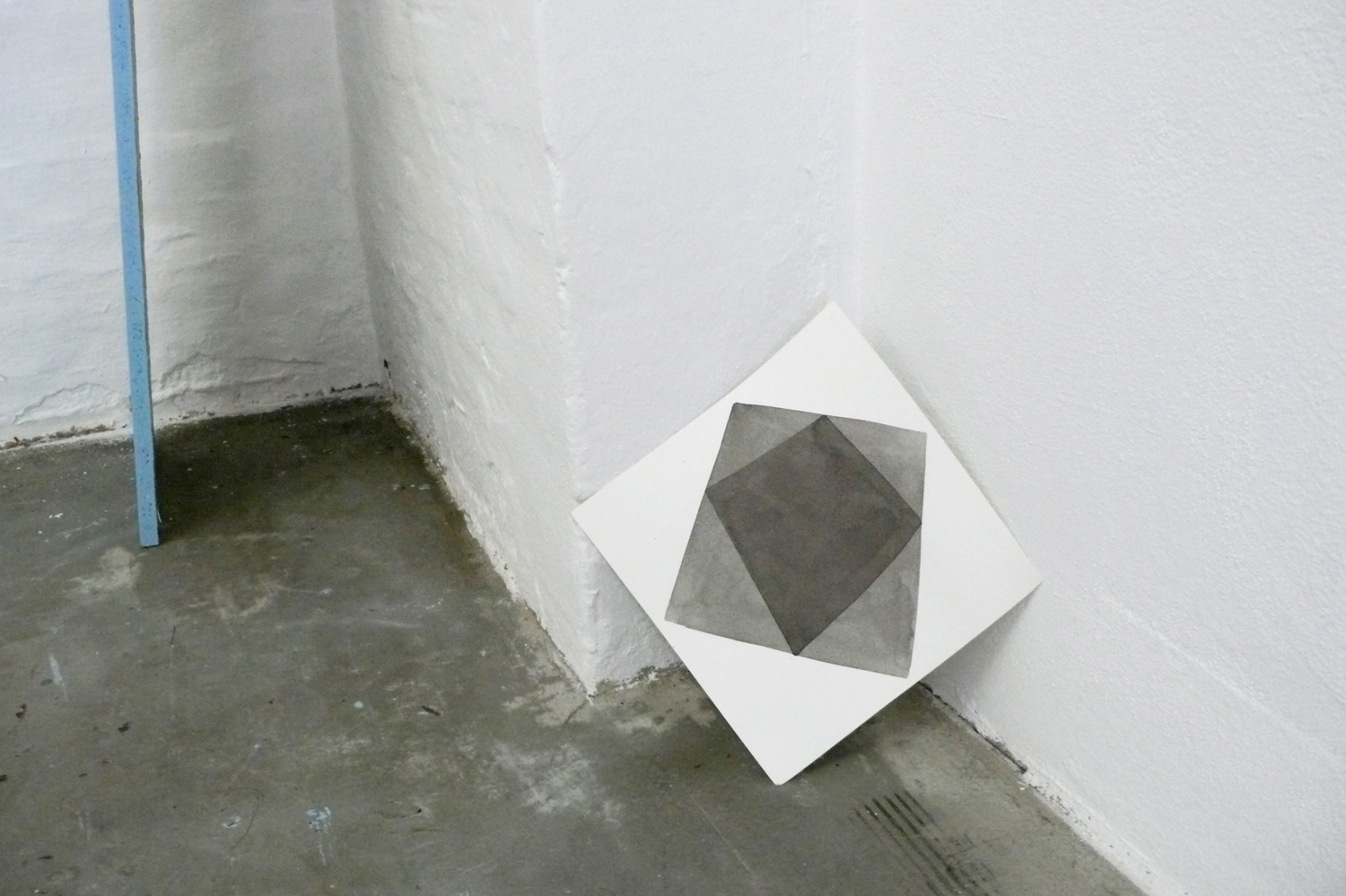 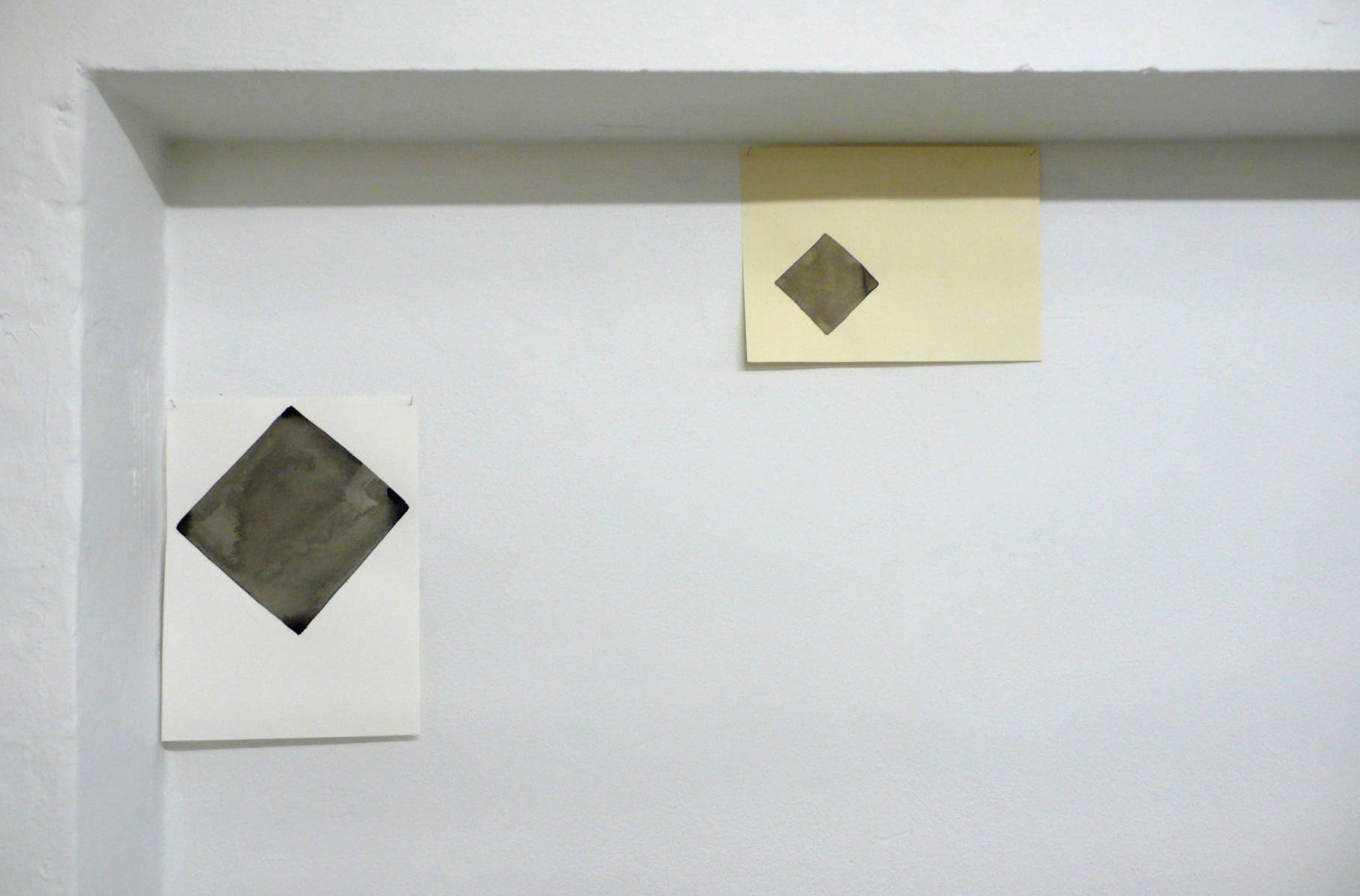 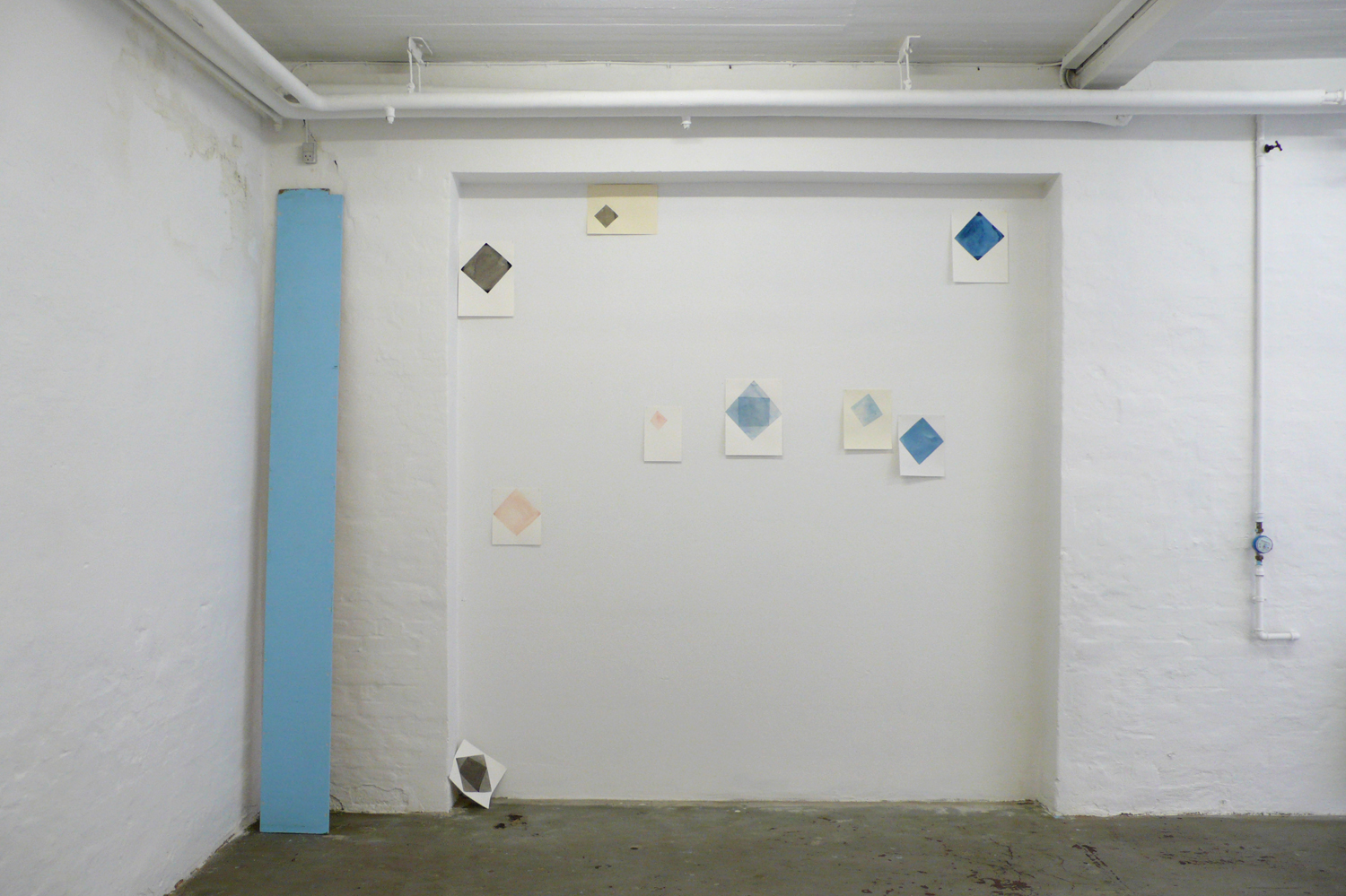 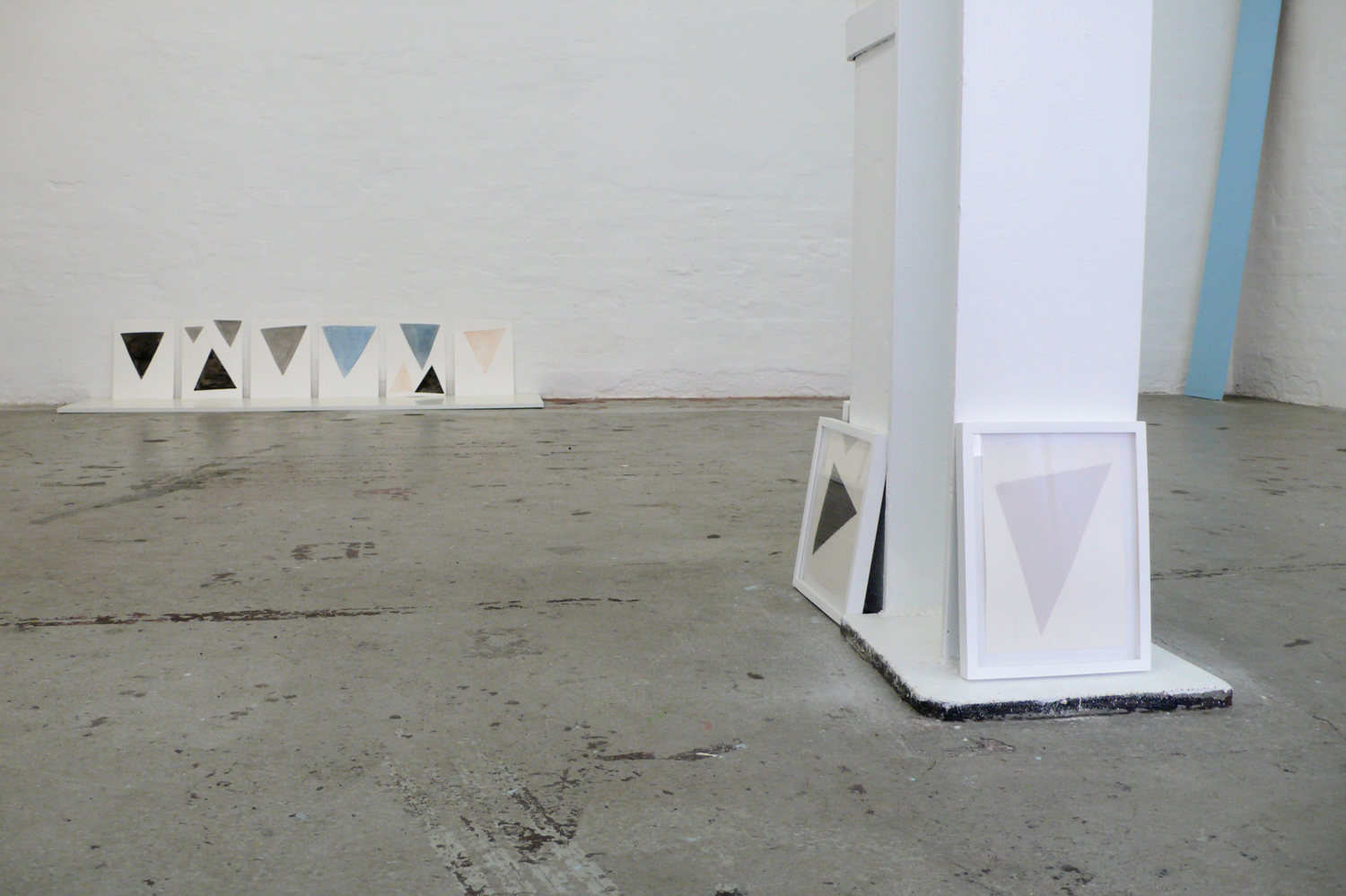 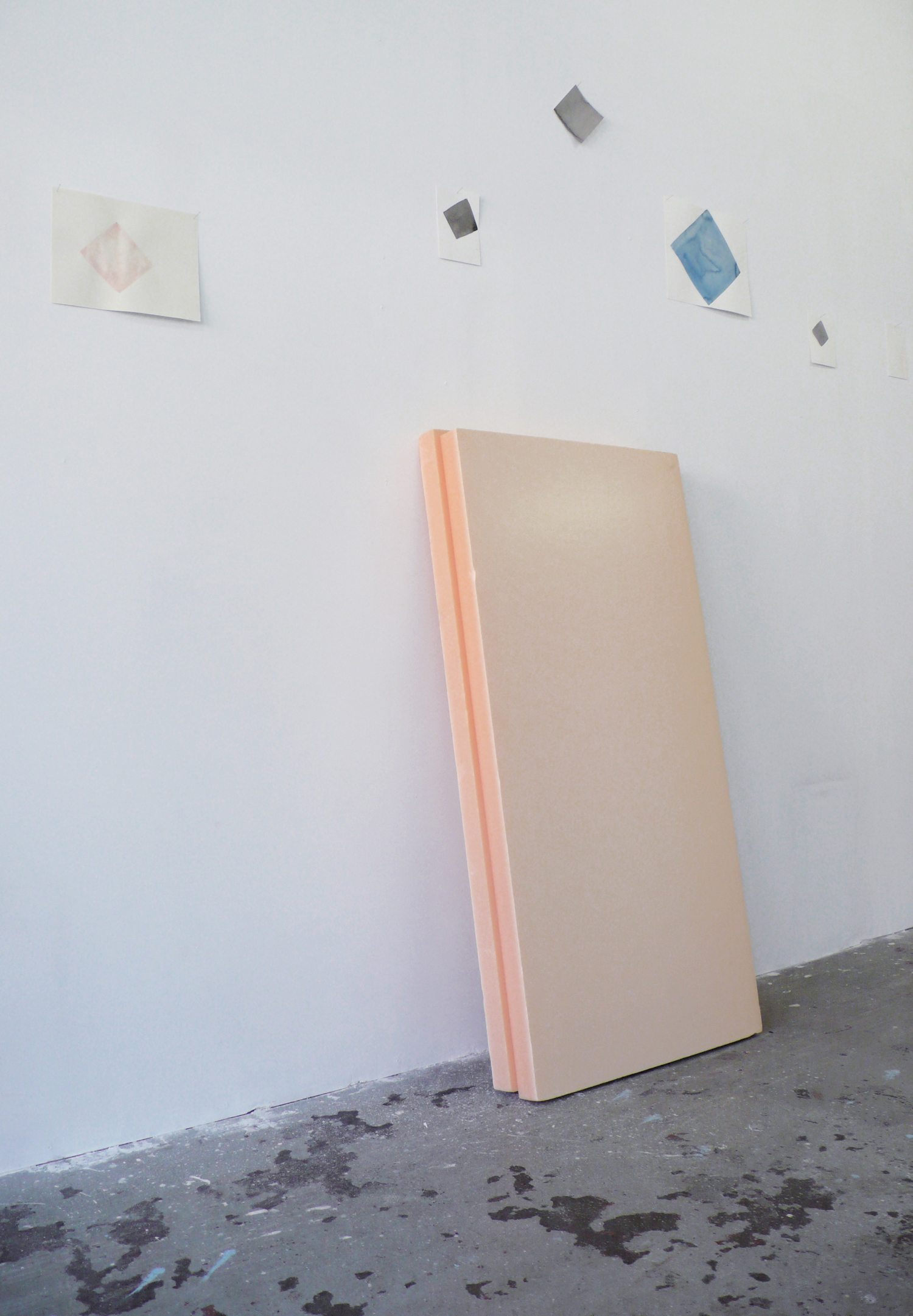 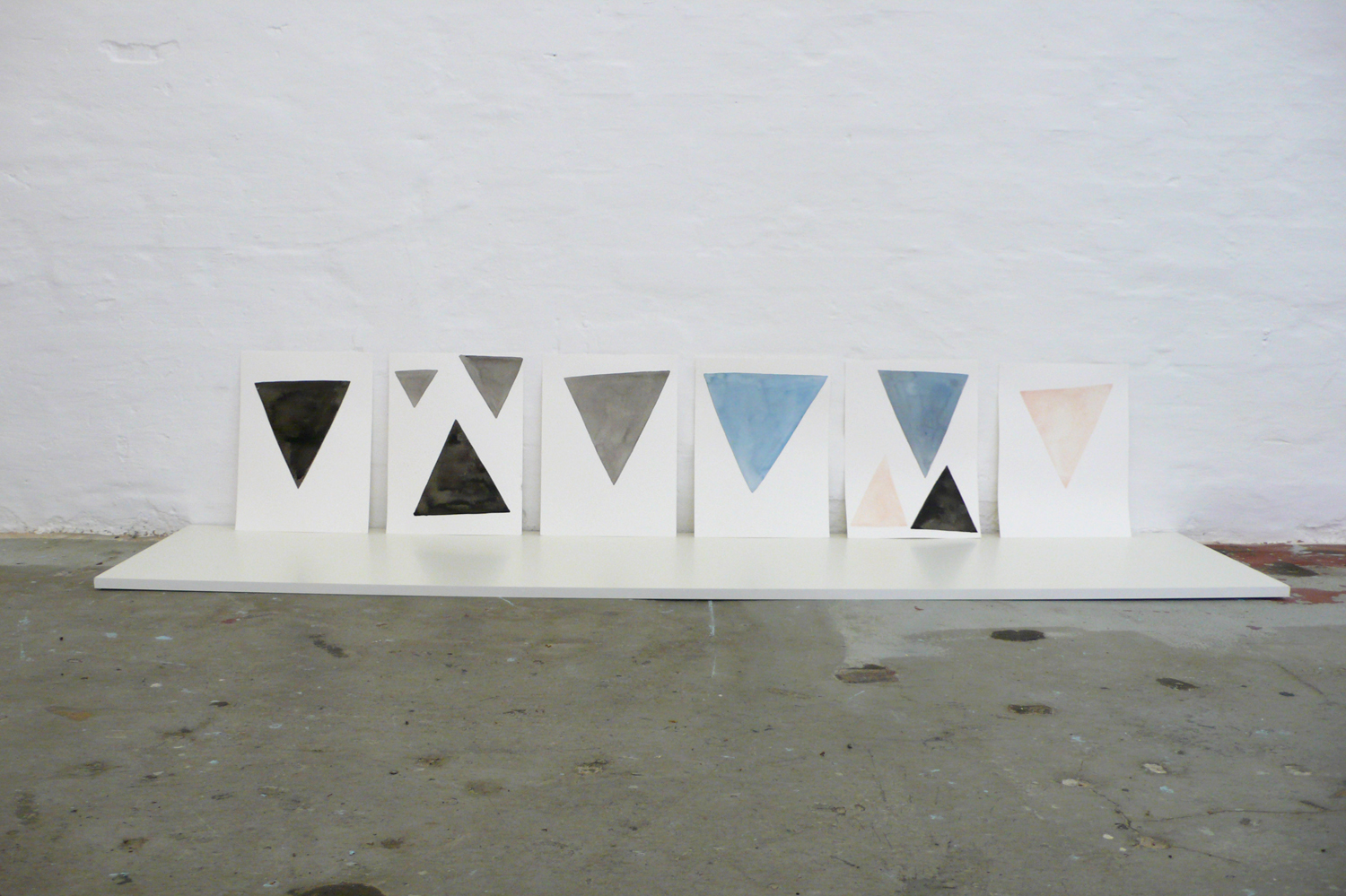 All photos by Nicola Louise Markhus