An exhibition in three stages 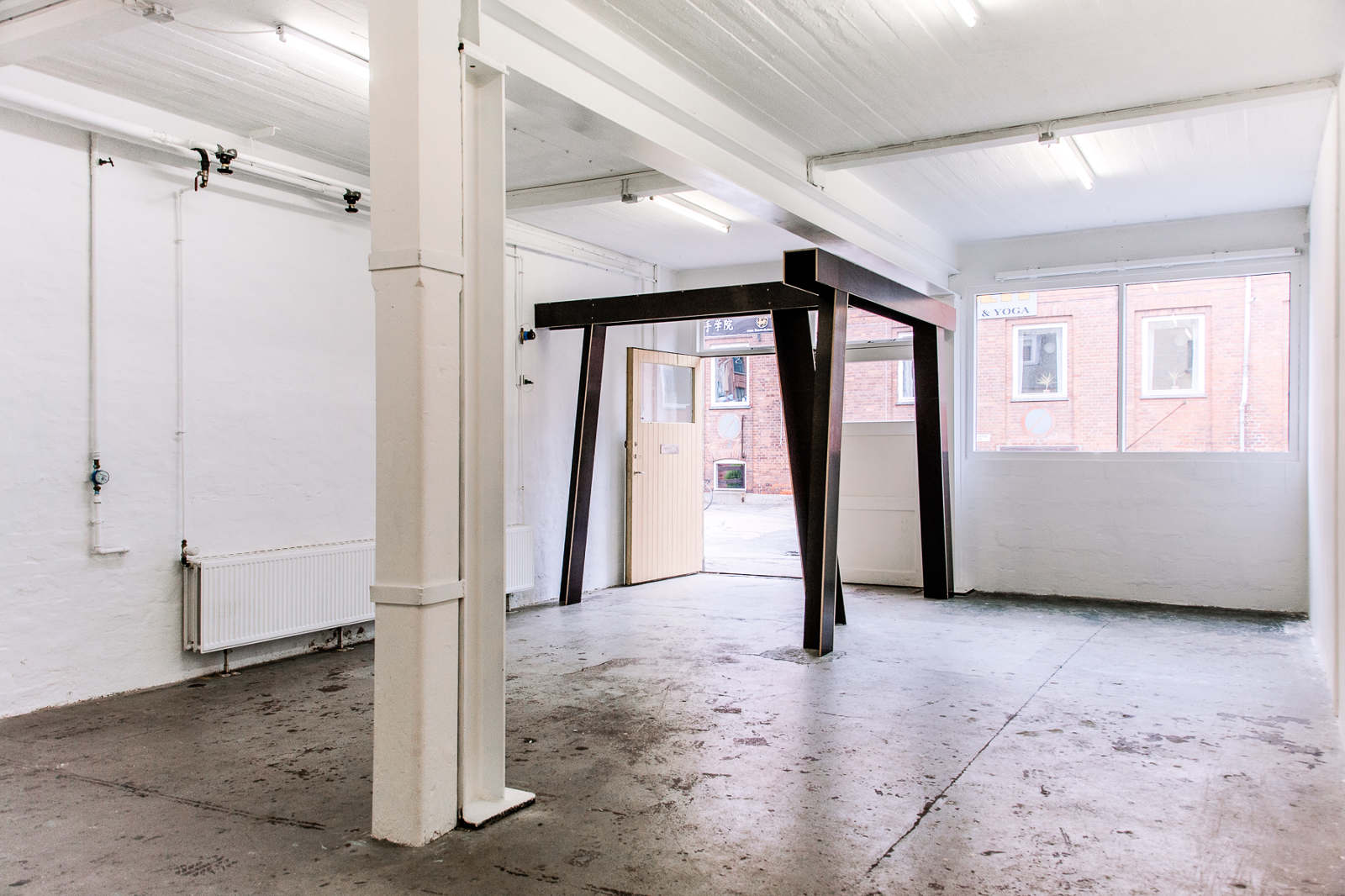 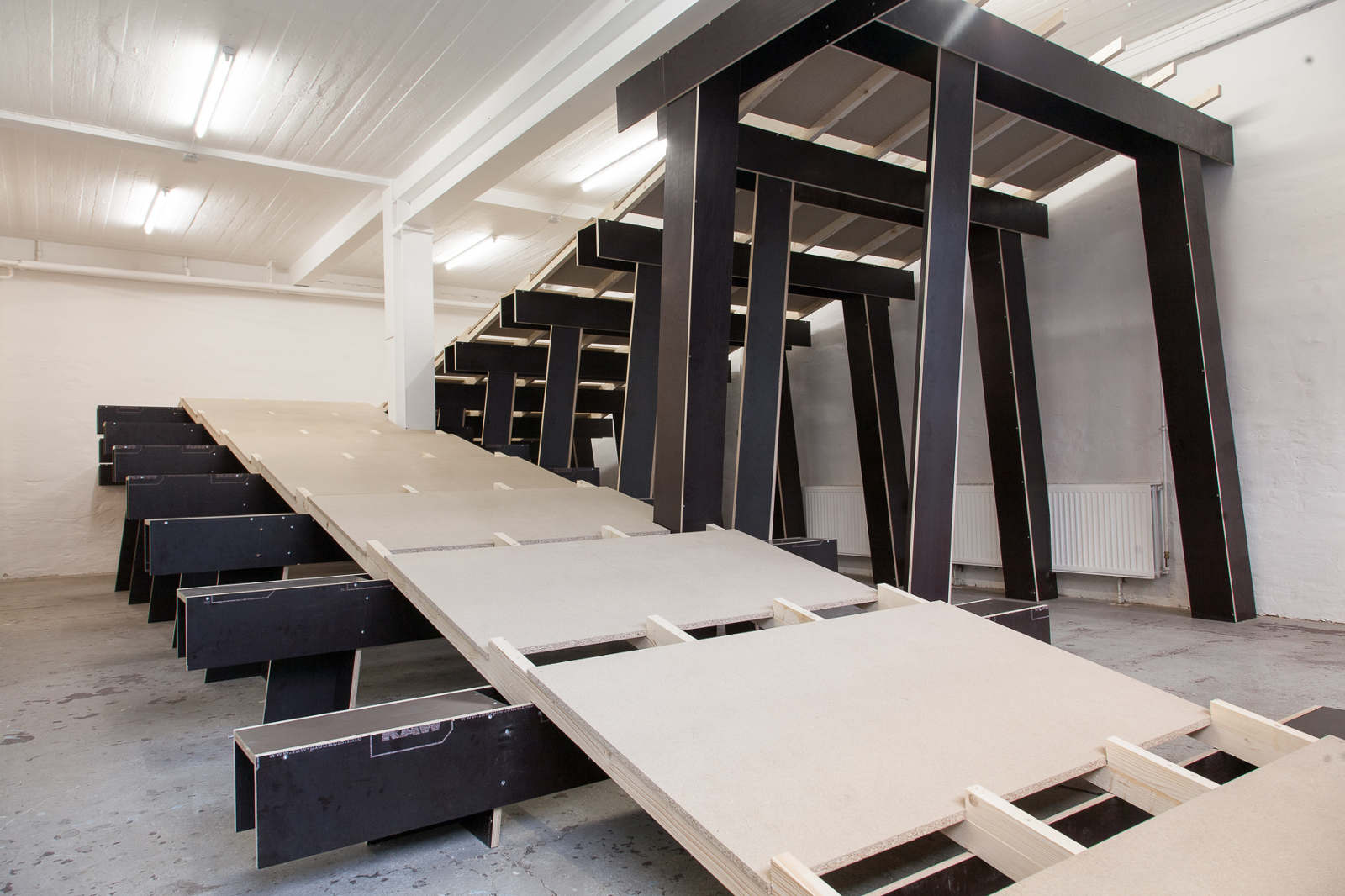 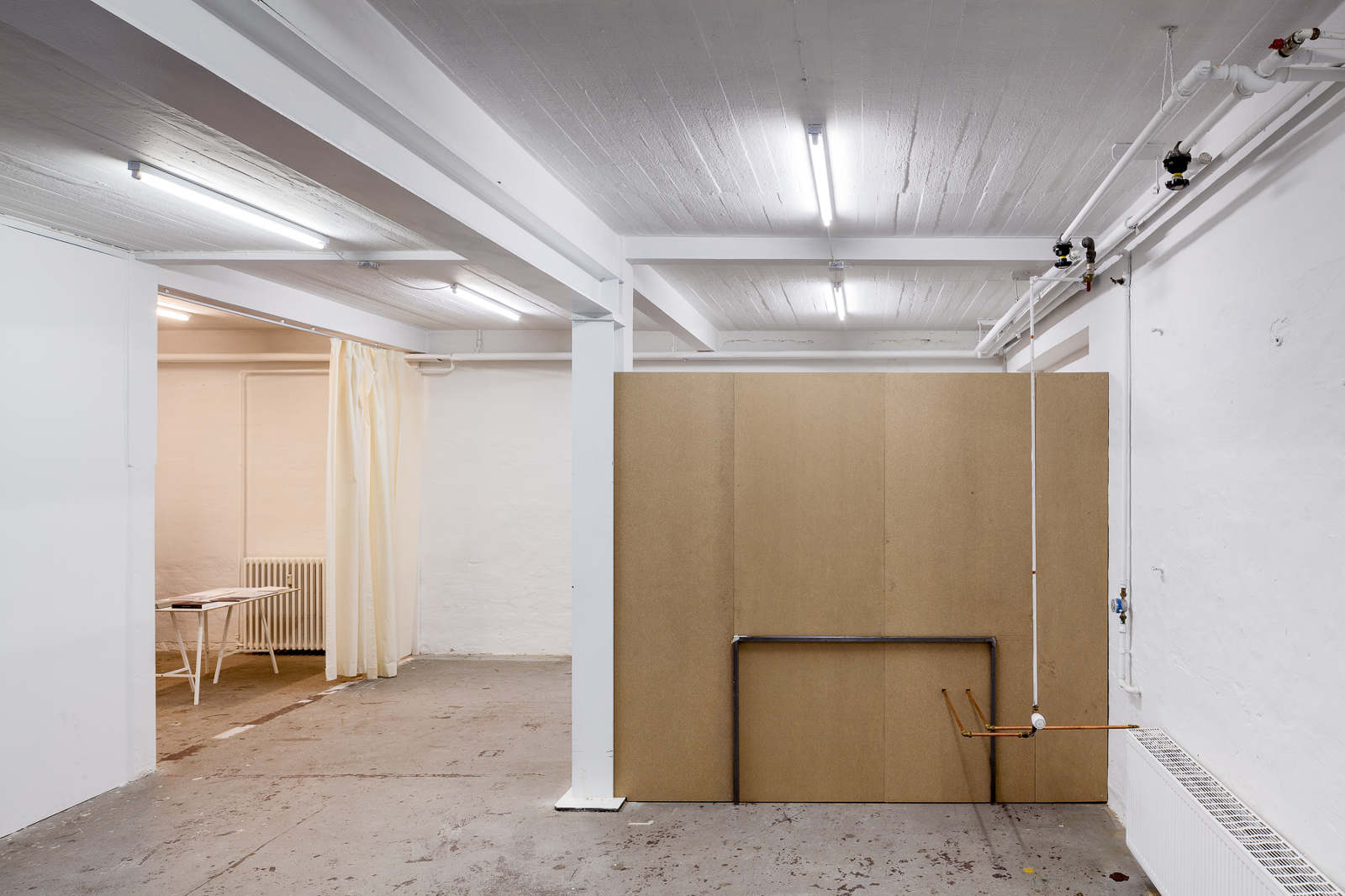 This autumn Another Space presented a series of exhibitions in which the invited artists and architects worked site-specifically and in extension of each other’s works. The form of the relay was intended to bring a situational, investigative and unpredictable character to the individual practices, posing questions about framework, process, authorship and artistic autonomy, accumulative structures and manipulation of space. In connection with the openings we hosted talks between the artists and architects about the field between art and architecture, their work in the exhibitions and forms of collaboration.

This is the last season in our Amager-venue. From 2015 Another Space will be centred more around the curatorial collaboration than a physical space, taking on a nomadic form with bases in Copenhagen and Oslo.

For the first stage, Øystein Aasan built two portals that refer to japanese toriis, gates that are placed in front of temples and mark the symbolic passage from the earthly and profane to a sacred place. Set up directly inside the entrance of the exhibition space, Aasan’s gates prolong the moment of entering – marking the transition, while leaving the rest of the space empty. The two portals are placed perpendicular to each other, confronting the viewer with an immediate decision about entering one way or the other. As a gesture towards Vaerk>Sted, who will use the gates as a starting point for their exhibition in the next stage, it points to a beginning, an anticipation of what is to be continued. 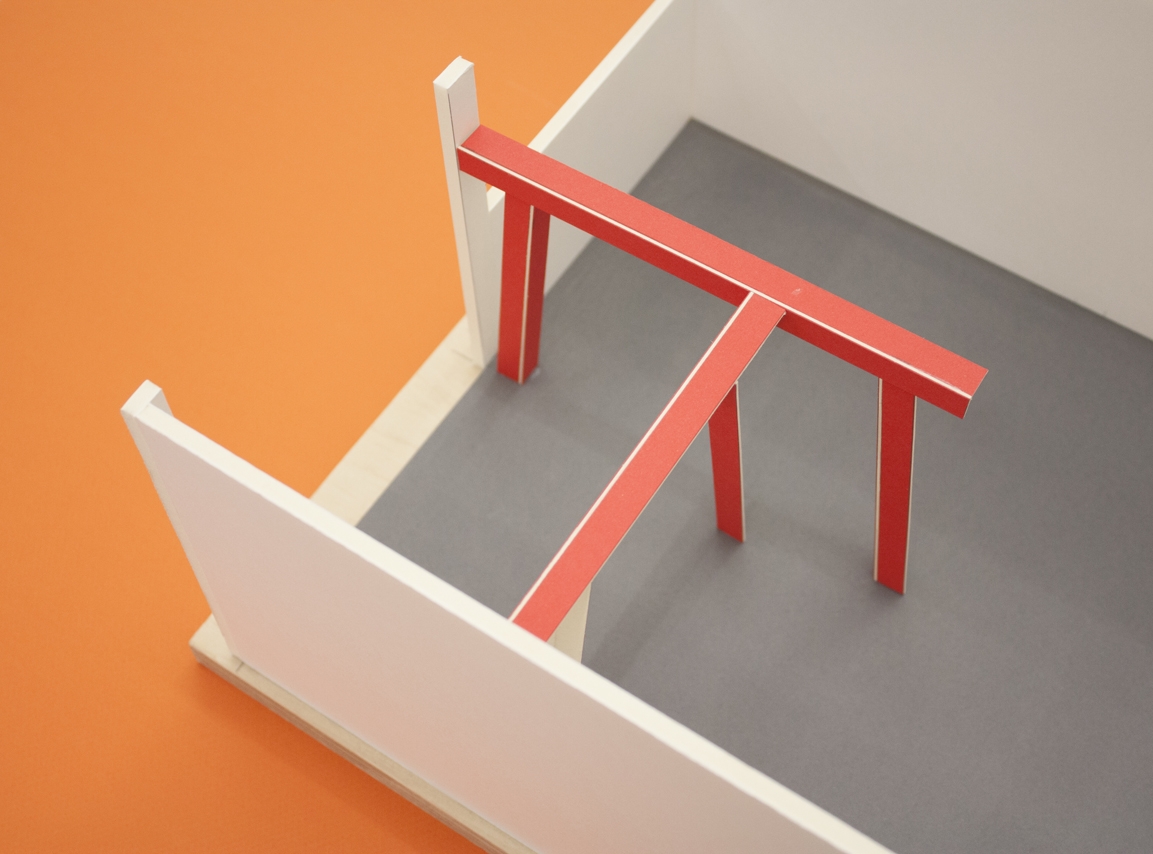 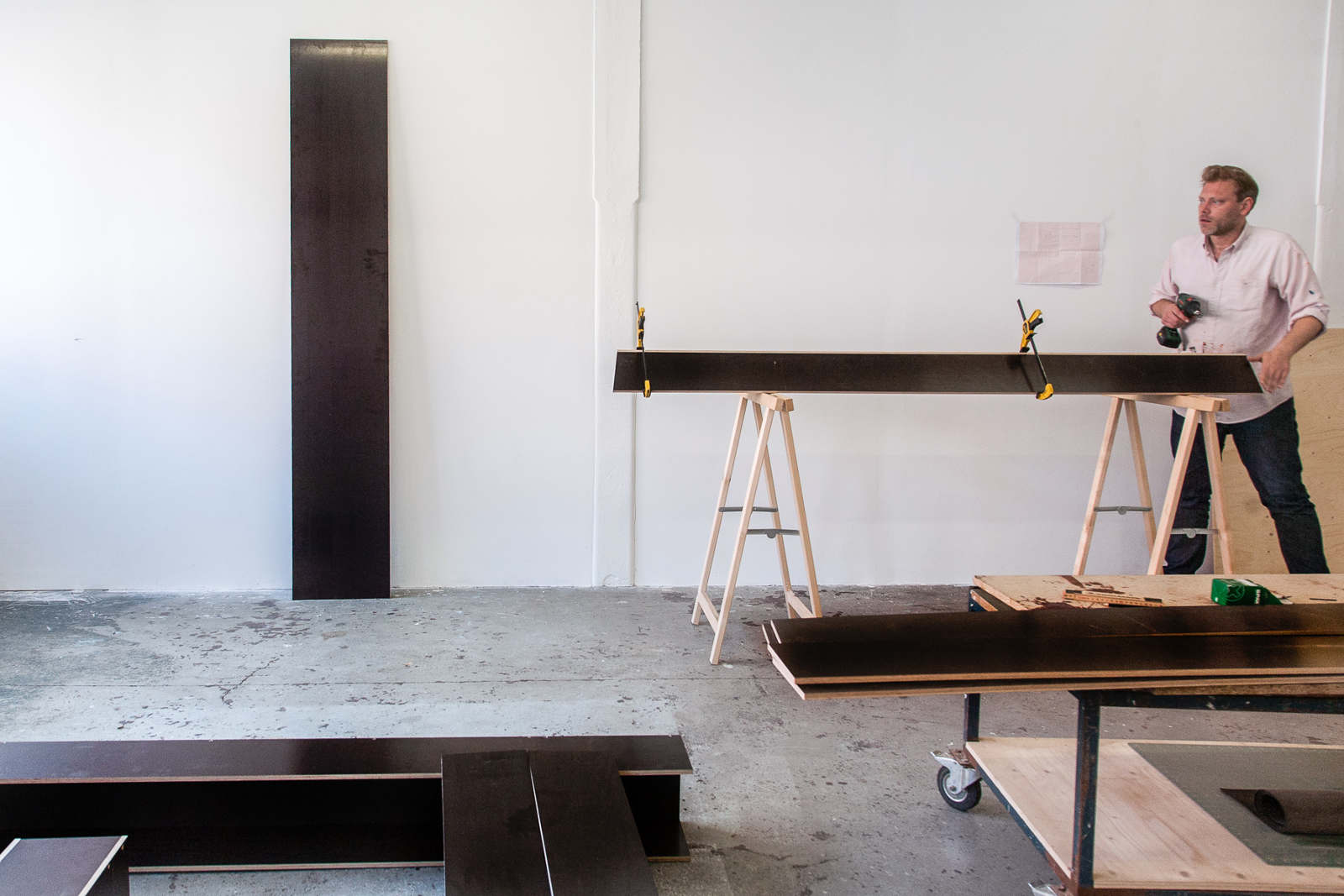 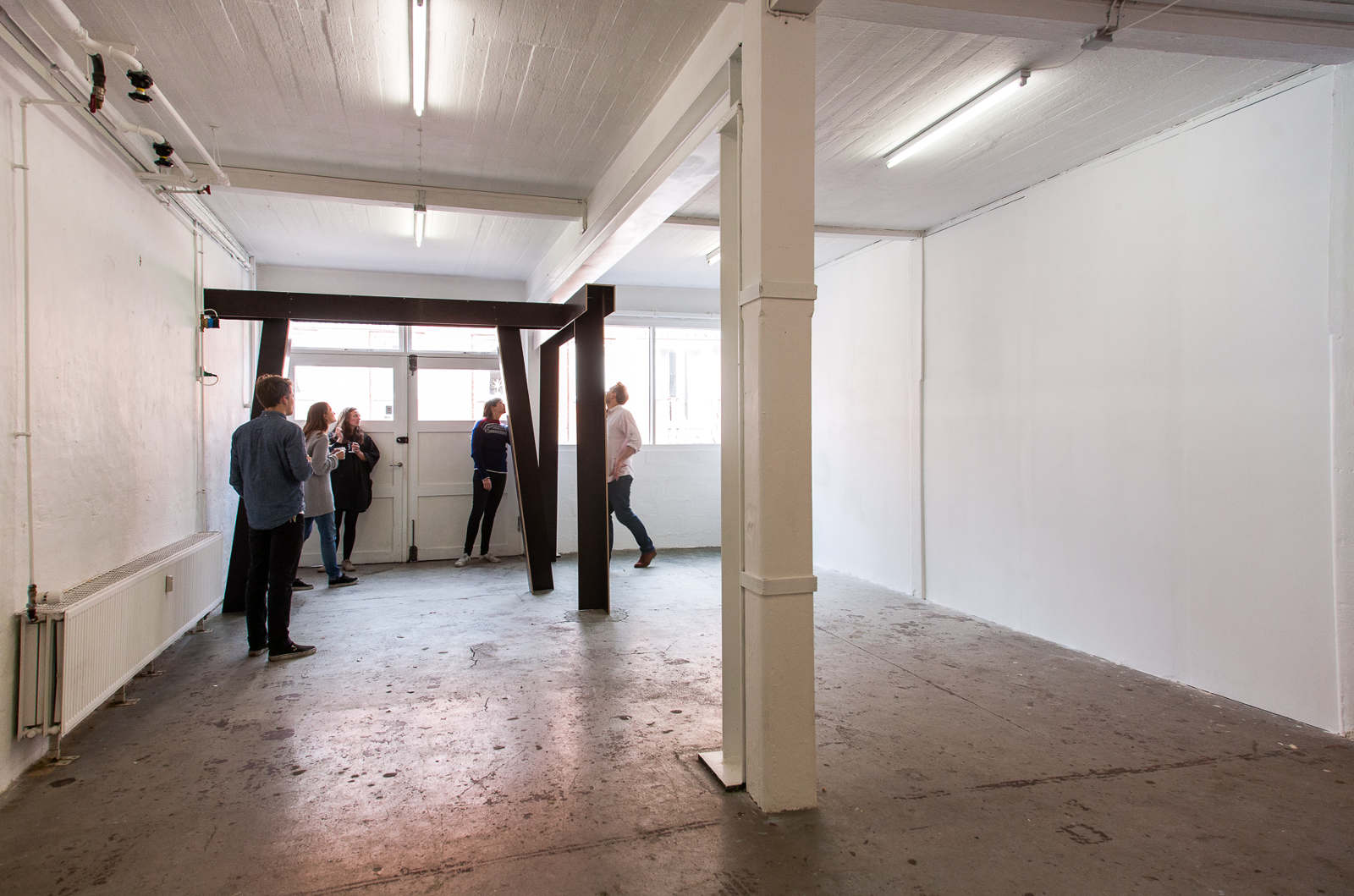 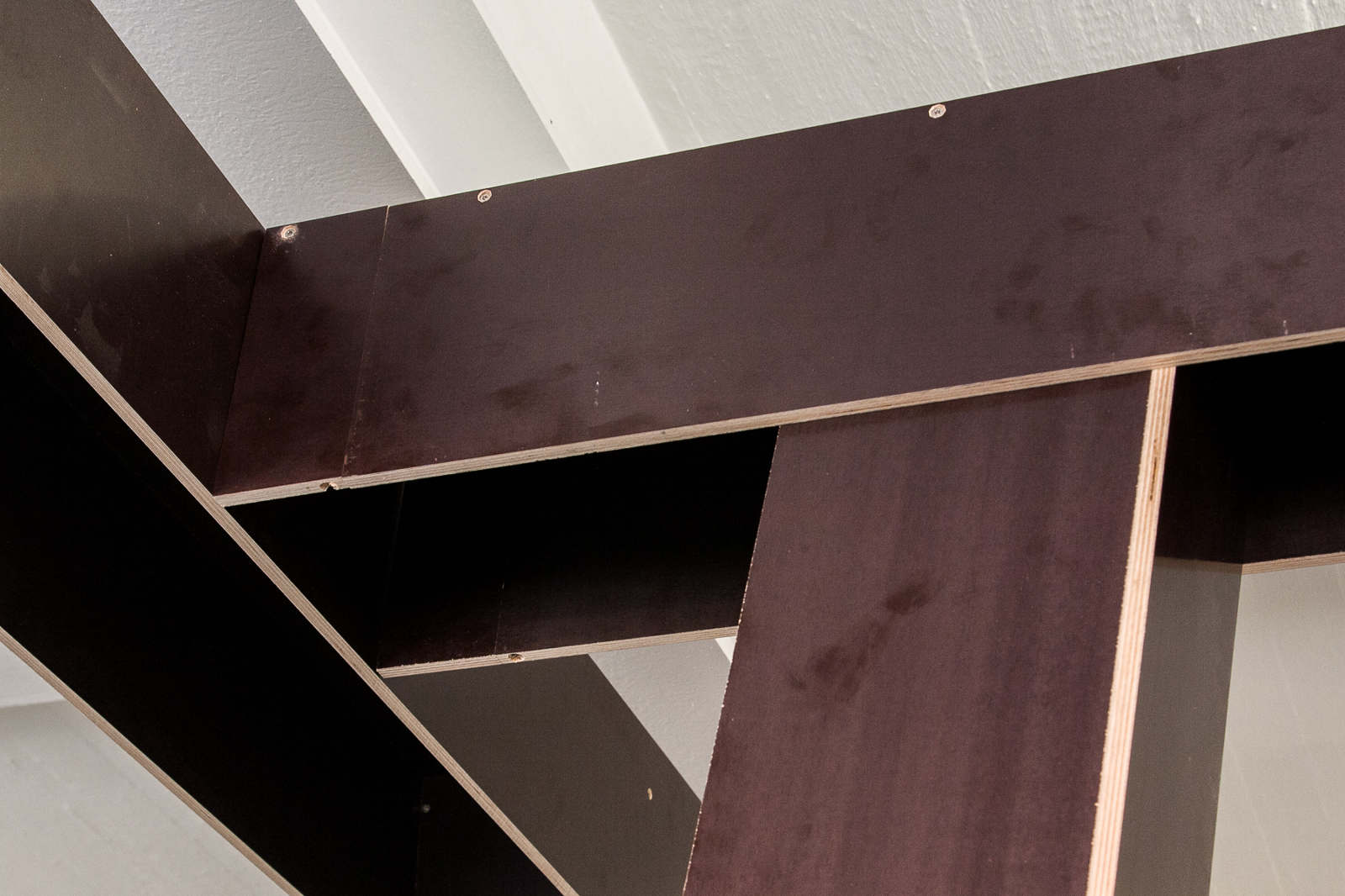 Public talk:
On the opening night writer and curator Markus Richter (0047) moderated a discussion between Aasan and Ion Sørvin from the art collective N55. The talk aimed to bring together their similar interests in visionary projects and architecture, while their different approaches to collaborative art production and open-ended art work put forward the relation between a politics and a poetics of space. 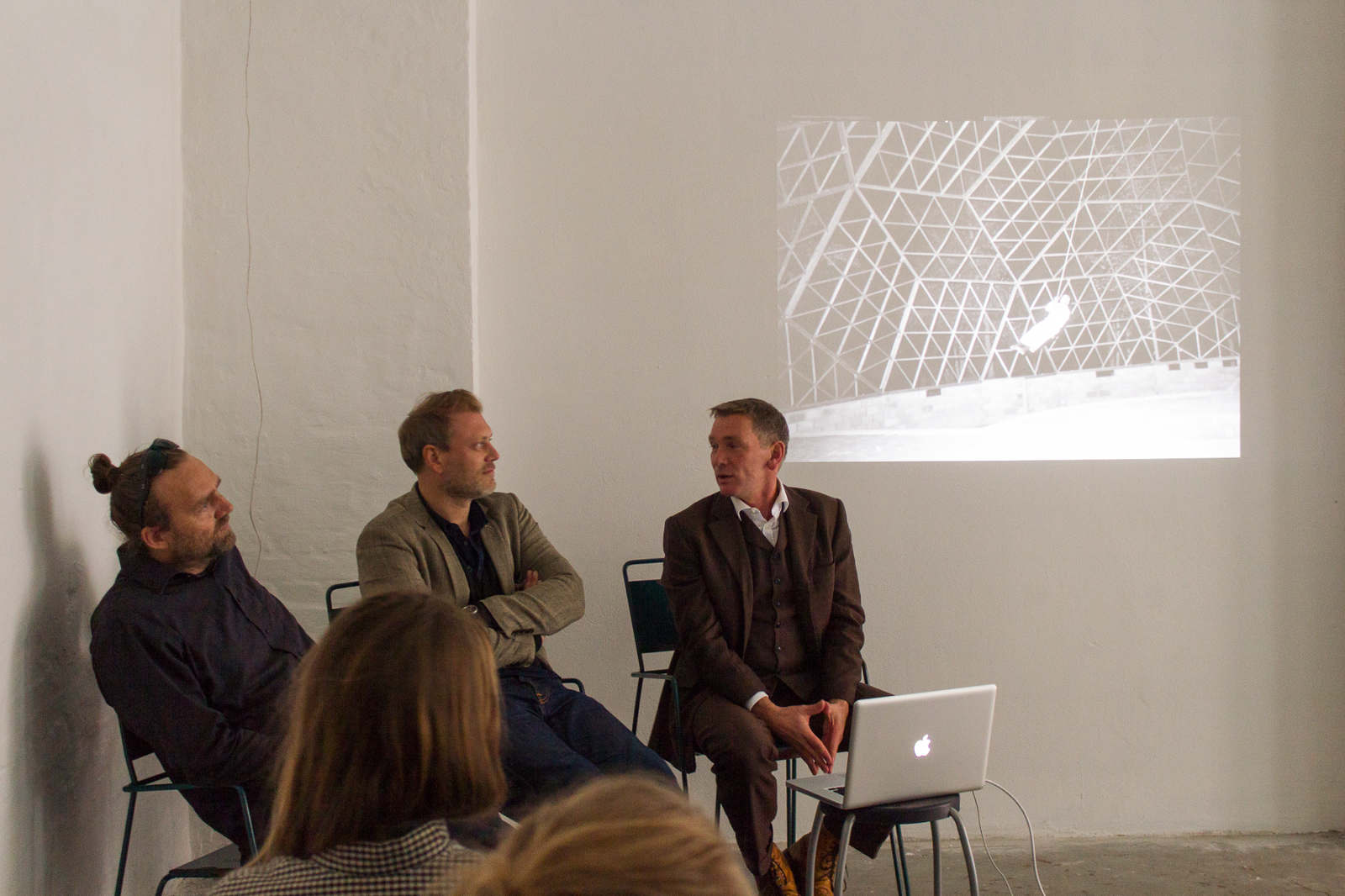 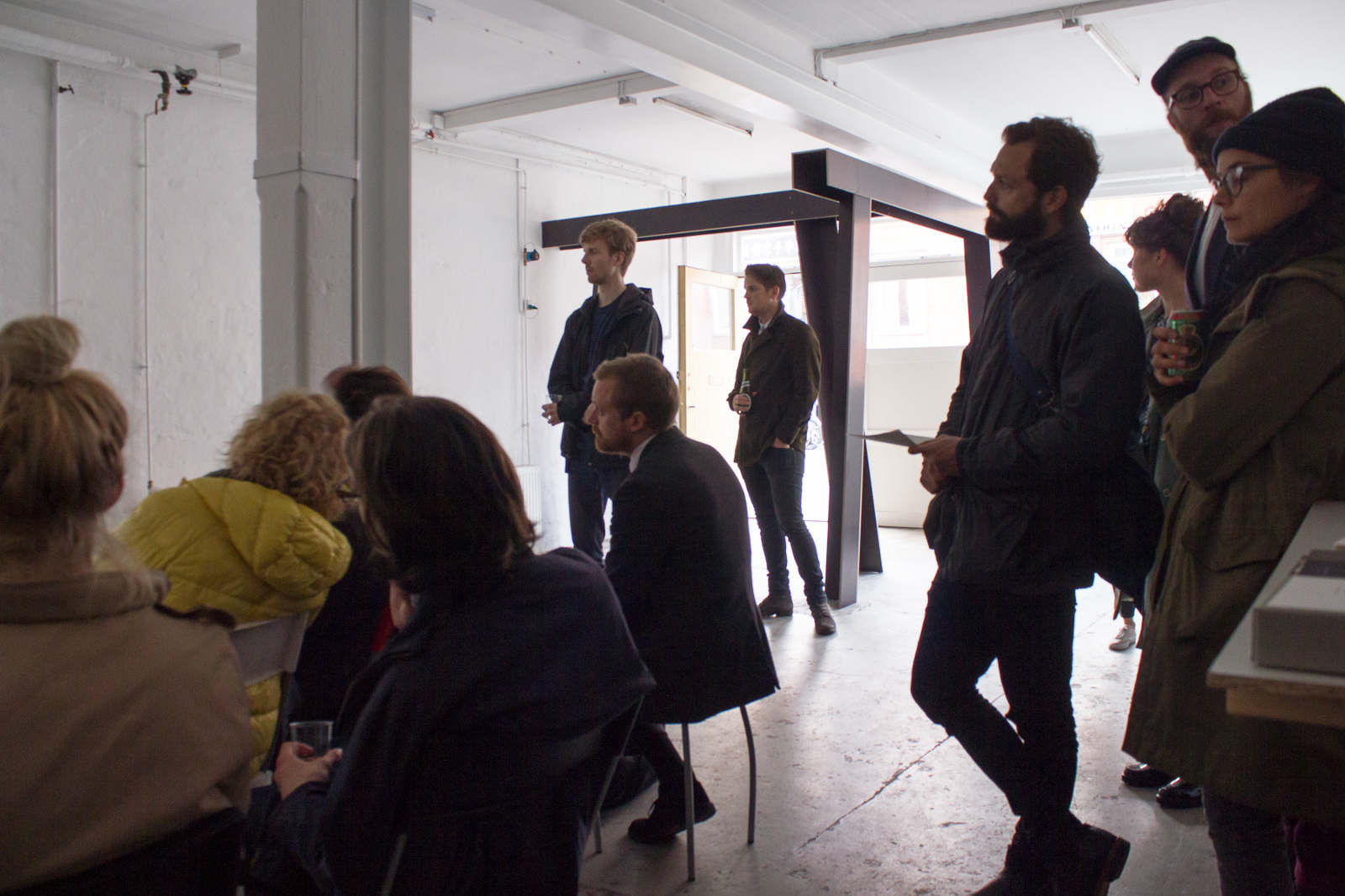 Øystein Aasan’s two film-faced plywood gates form the starting point for architects Ida Flarup and Maria Mengel in the second stage of the exhibition series. In response to Aasan’s intervention, viewed as both a threshold and an invitation, VAERK>STED takes up the motive of the gate, creating a series of copies that not only prolong and reinforce the entering situation, but eventually dissolve the role and function of the portal. Two rows of gates create a doubling situation where the size of the gates gradually decrease and increase, creating a stepping landscape that invites the viewer to climb the installation and take it in physically. The space is also dramatically redefined in this stage, filling out the room to a near maximum and compelling us to experience the installation from on top or within. 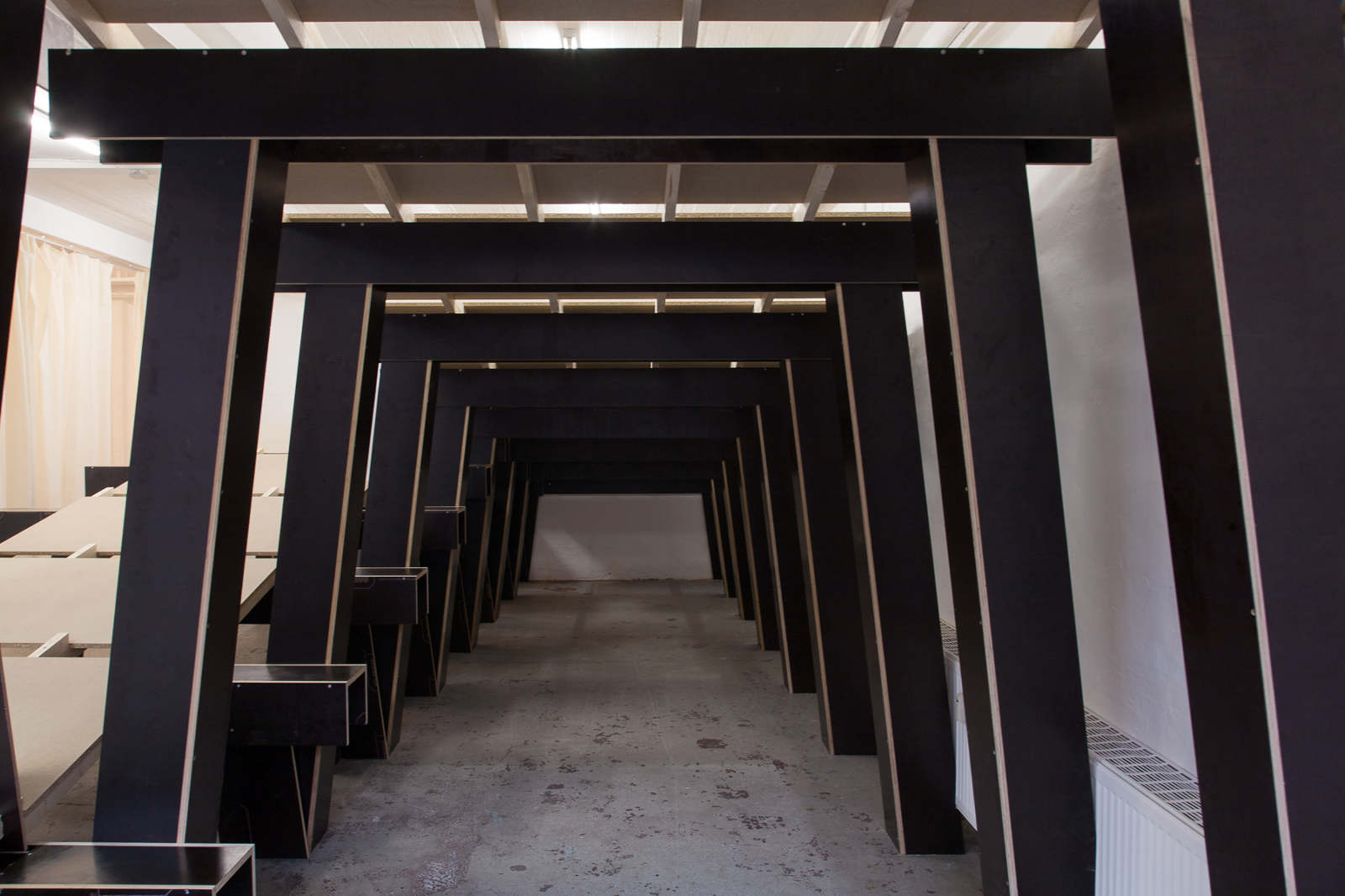 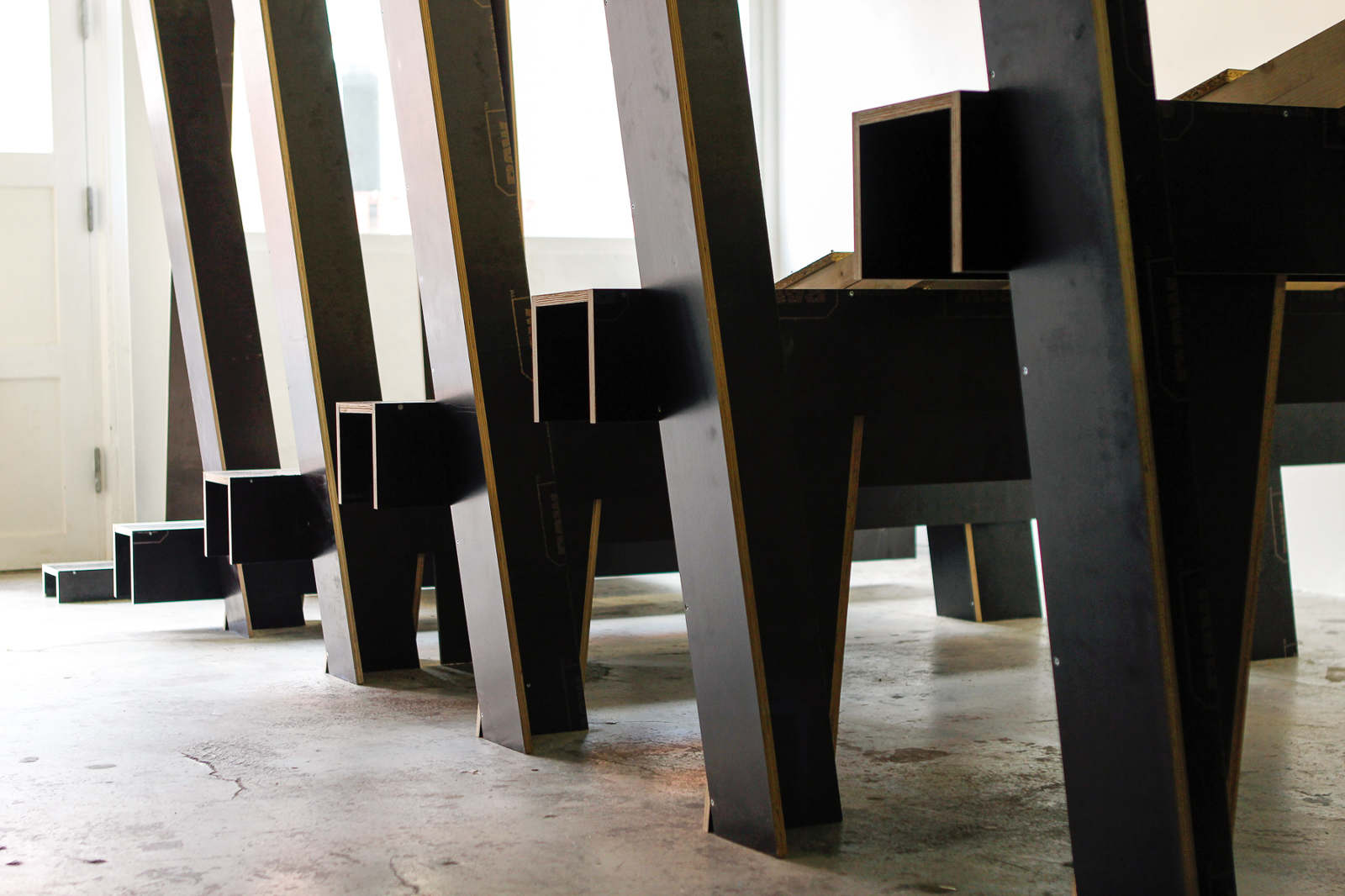 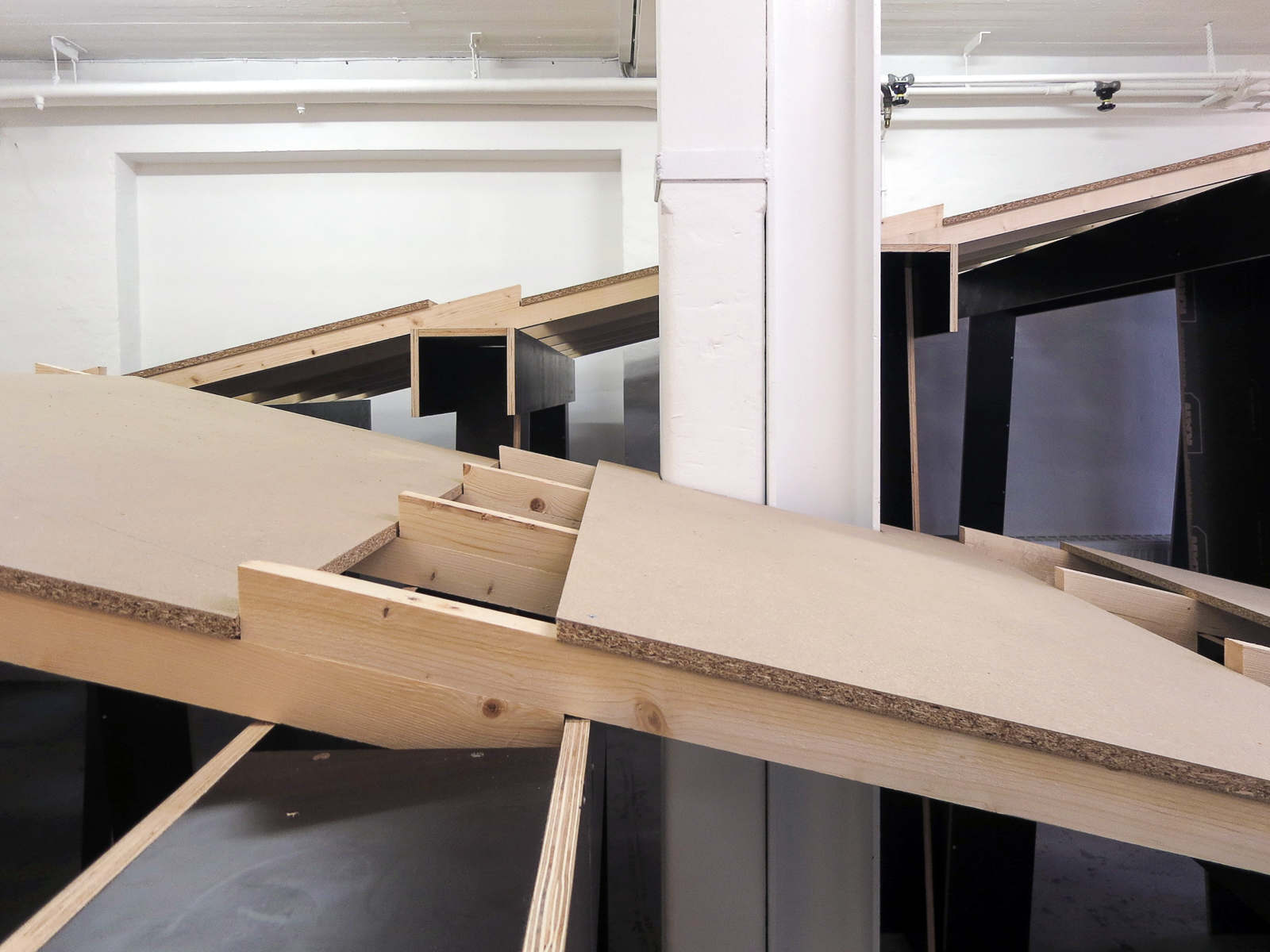 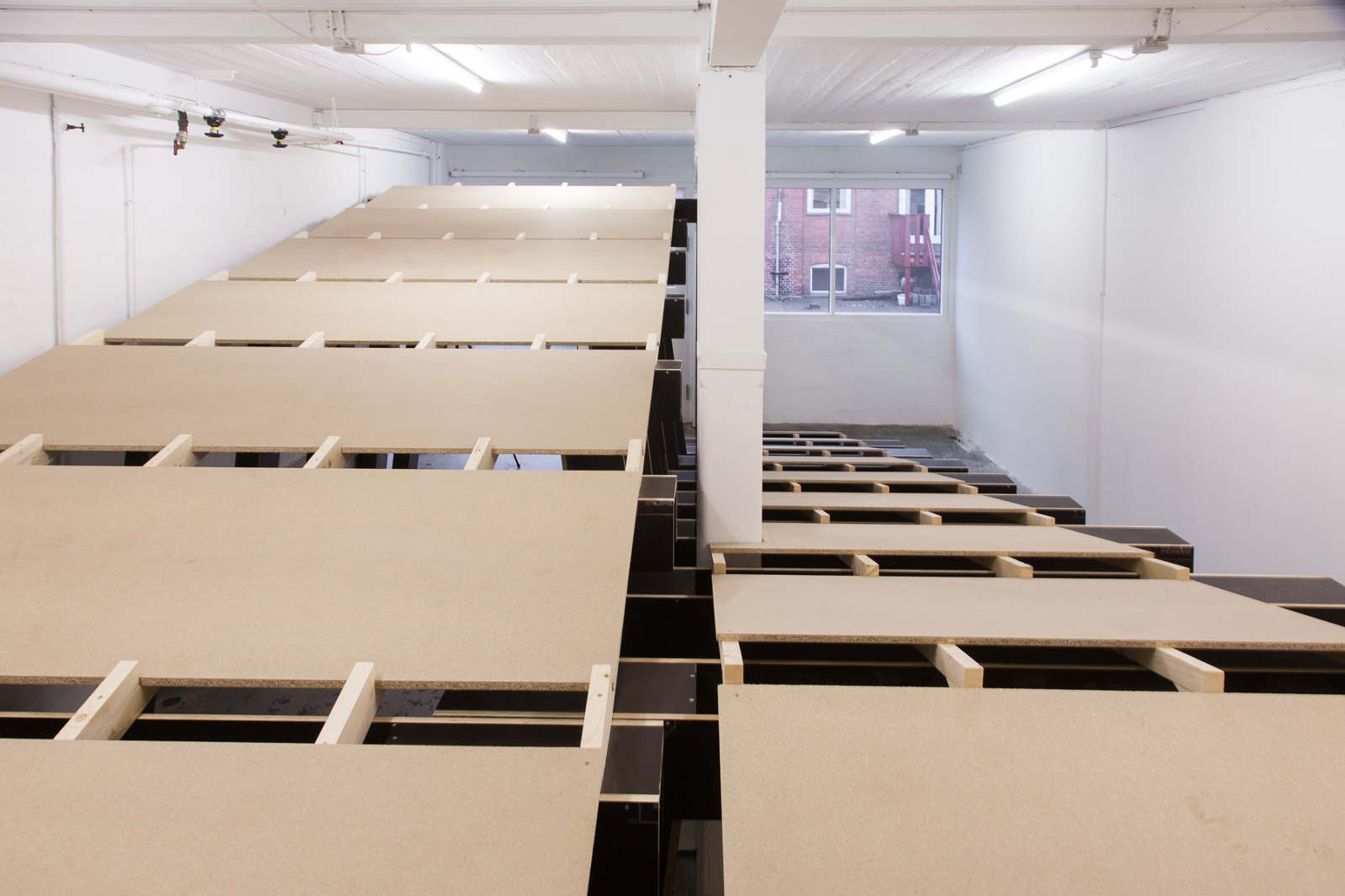 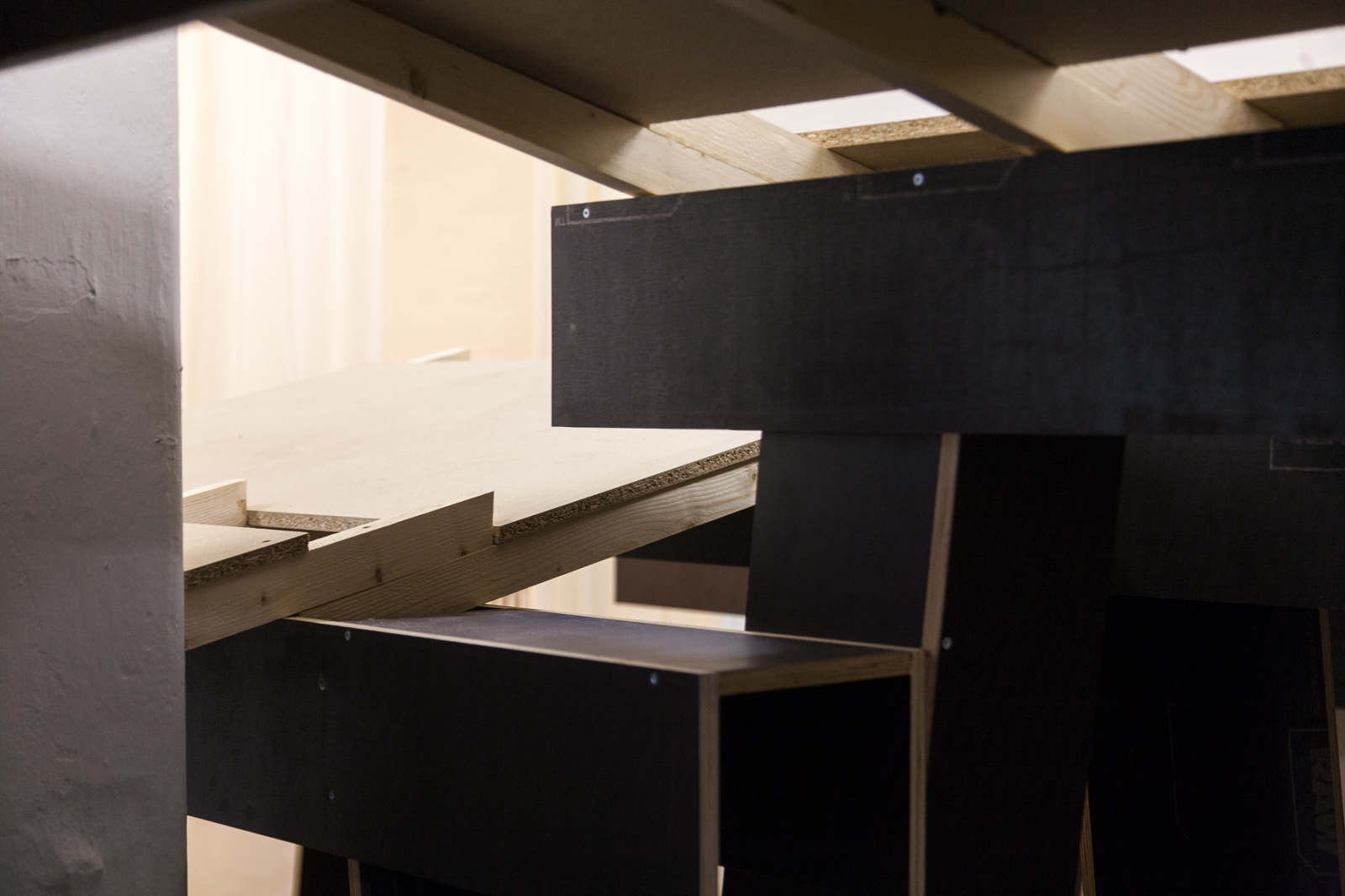 Presentation and conversation:
On the opening night Mengel and Flarup presented the exhibition in the context of their previous works, and talked about the process of re-working another artist’s concept and physical intervention. In conversation with cultural theorist Lea Fløe Christensen they gave an insight into Vaerk>Sted’s working concepts, concern with poetics and experiences with working as architects within artistic frameworks. 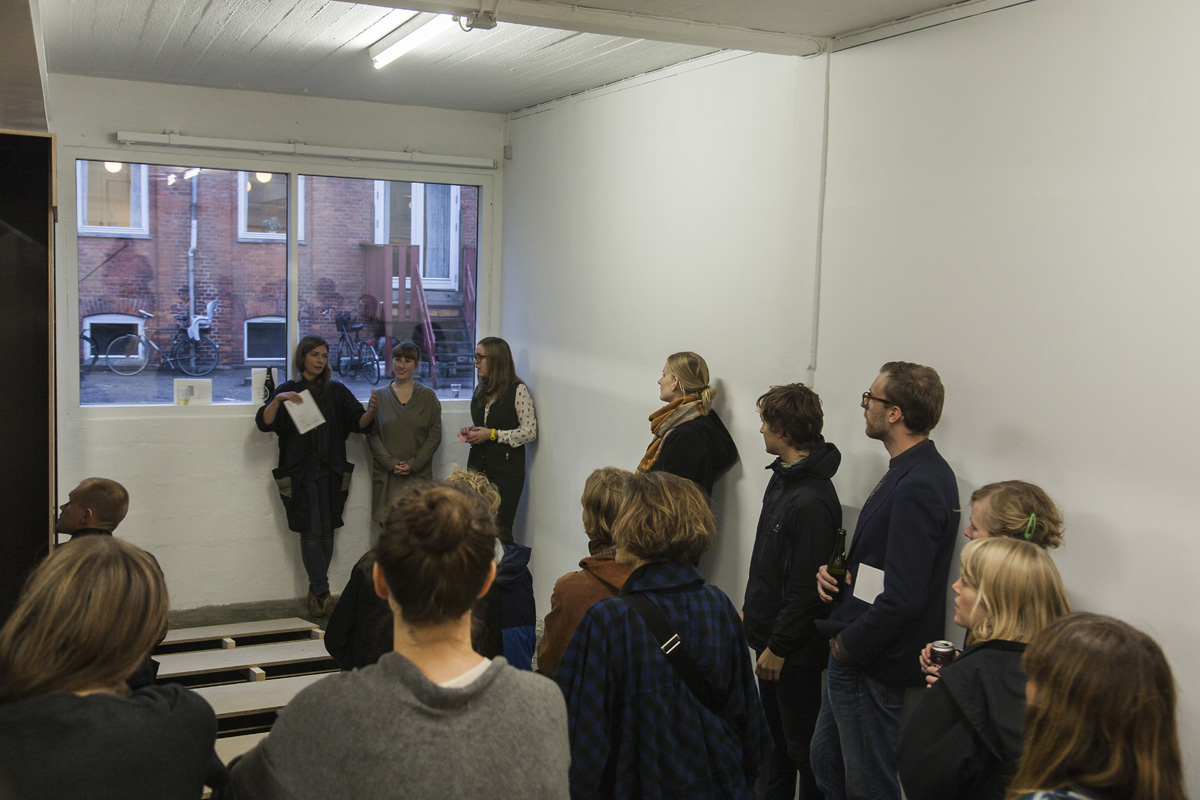 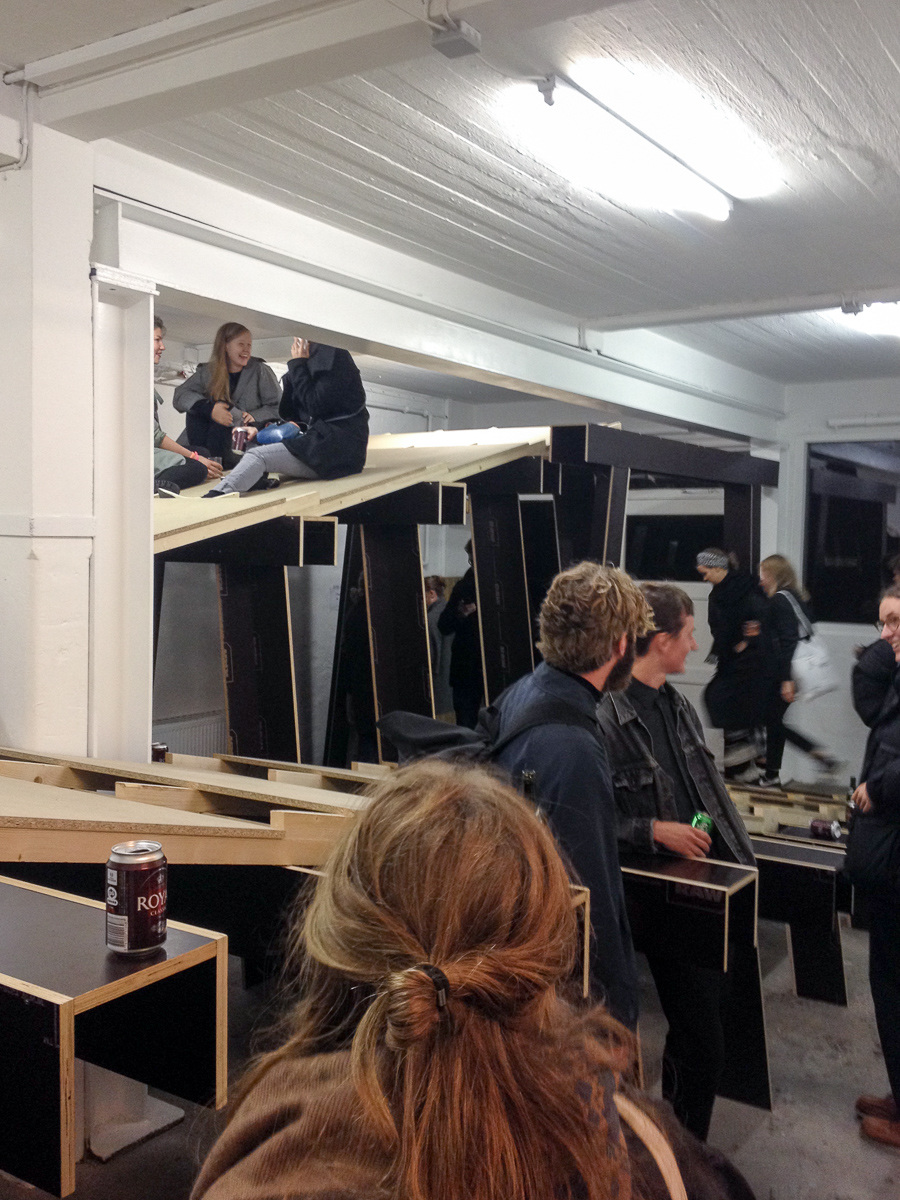 Stage 3: THE GATEKEEPER (A HOMEOPATHIC SHOW)

For the last stage in the exhibition series, Florian Neufeldt is handed the merged works of Øystein Aasan and Vaerk>Sted. In his transformation of the space, Neufeldt re-interprets the motifs and themes from the previous exhibitions, but this time creates several closed structures and circuits. The title can be interpreted as Neufeldt seeing himself as a preserver of Øystein Aasan’s original piece – the two portals – and a continuation of Vaerk>Sted’s role as gatekeepers. Many of their gates where impossible to enter, and the motif of the closed gate is re-occurring in Neufeldt’s works, emphasising it’s double role of allowing and denying access.

The materials and modules from the previous exhibitions are re-used, but are not necessarily visible or recognizable anymore. New elements are also introduced, a steel frame table that from one angle resembles – with a stretch of the imagination – a gate, while two gates form the structure for a table displaying works on paper. This metonymic structure of assembling elements through association draws a parallel to the idea of homeopathy, where one tries to heal the similar through the similar. Here, the answer to the problem is already included in the given situation. The circular motif re-appears both as insular systems within the show and as a series of shows looping back to its beginnings. 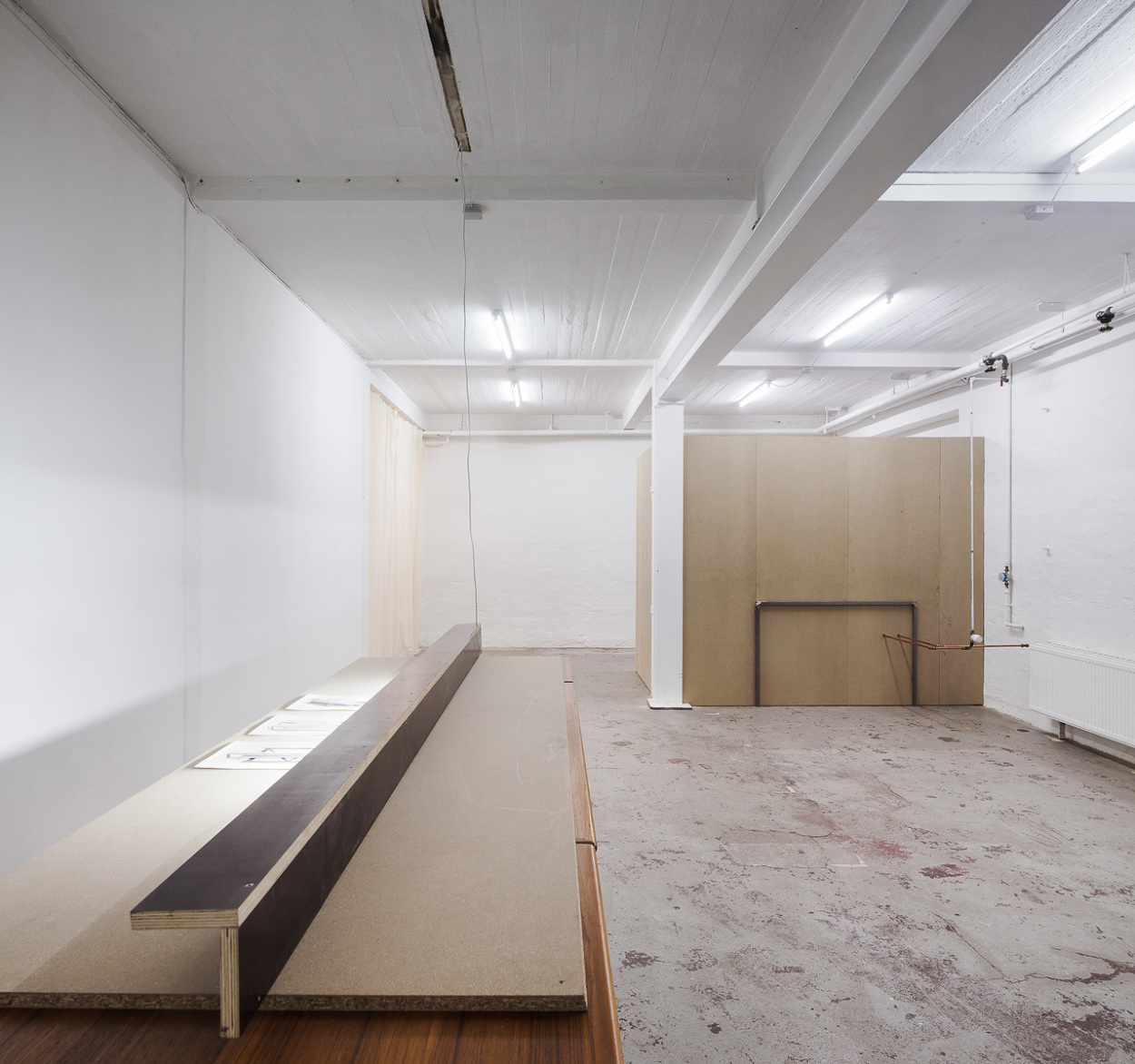 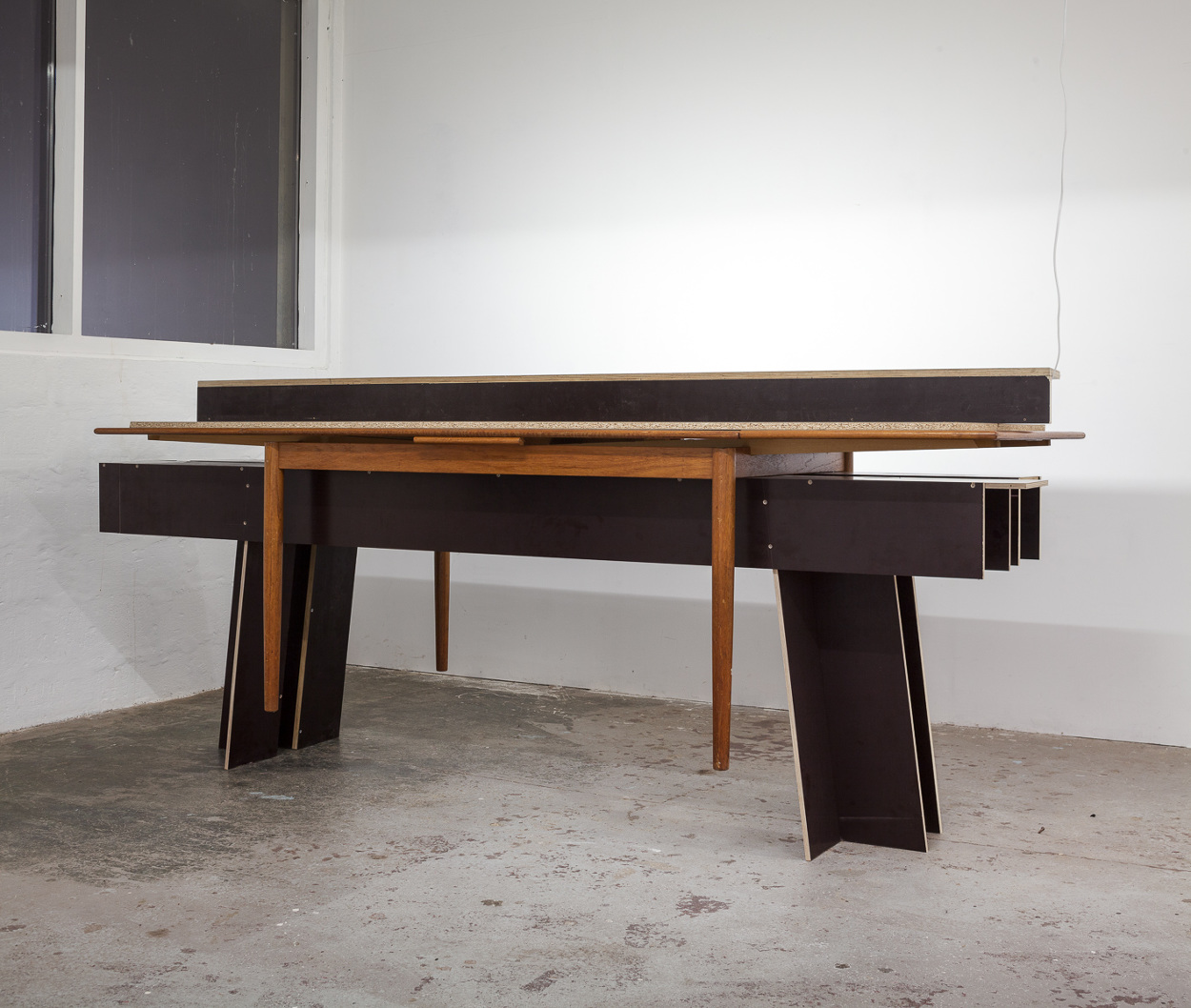 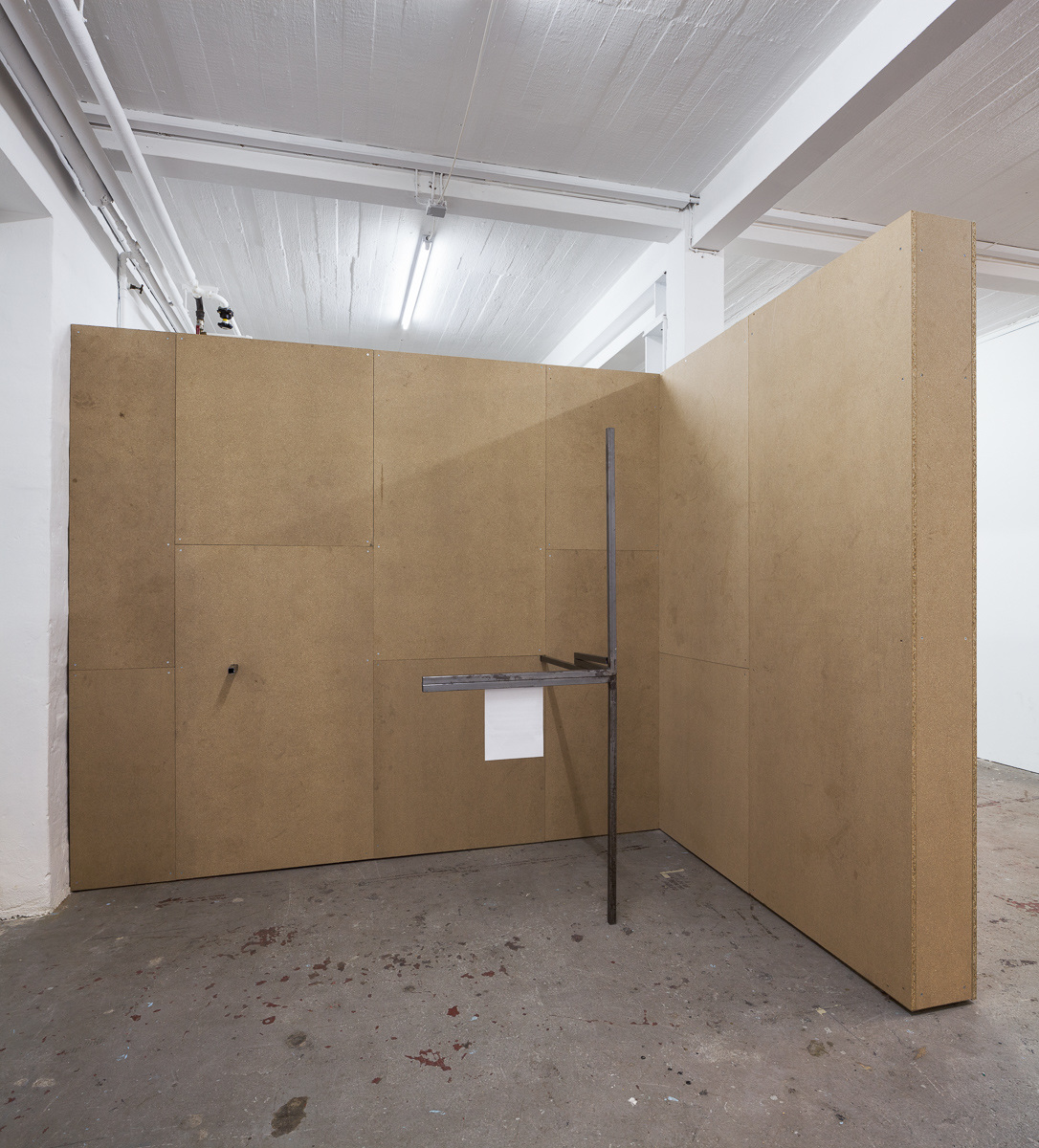 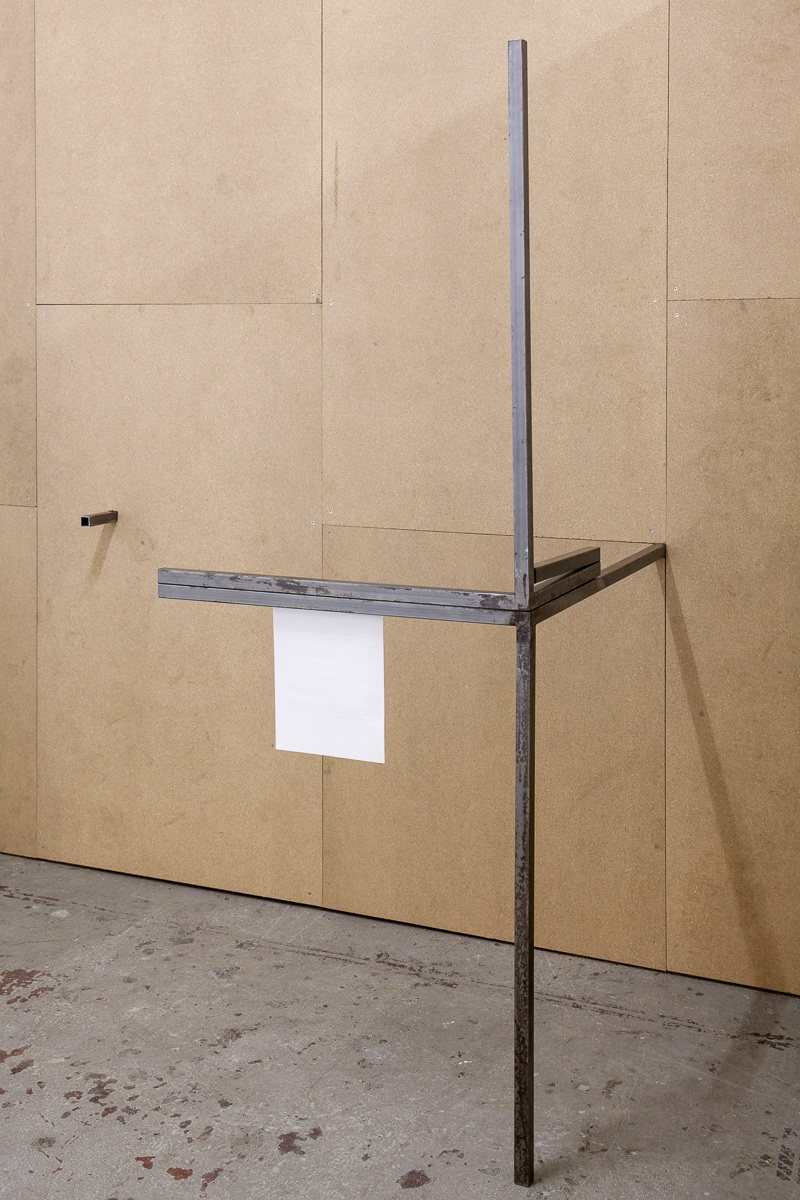 Presentation:
Florian Neufeldt presented his work in the space, and together with Another Space and Maria Mengel from Vaerk>Sted (Stage 2) looked back at the exhibition’s three stages and the experiences of working in the form of the relay. 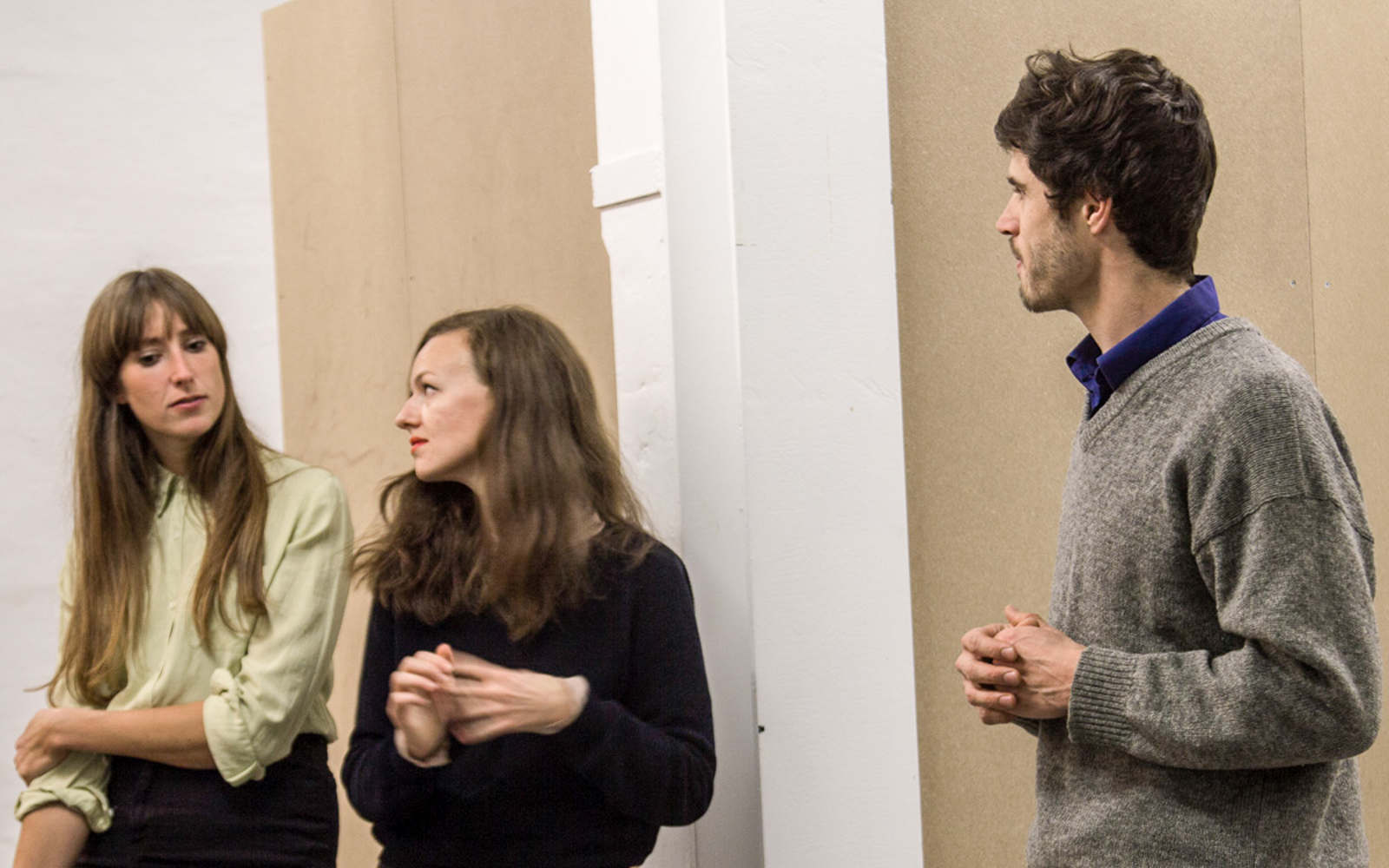 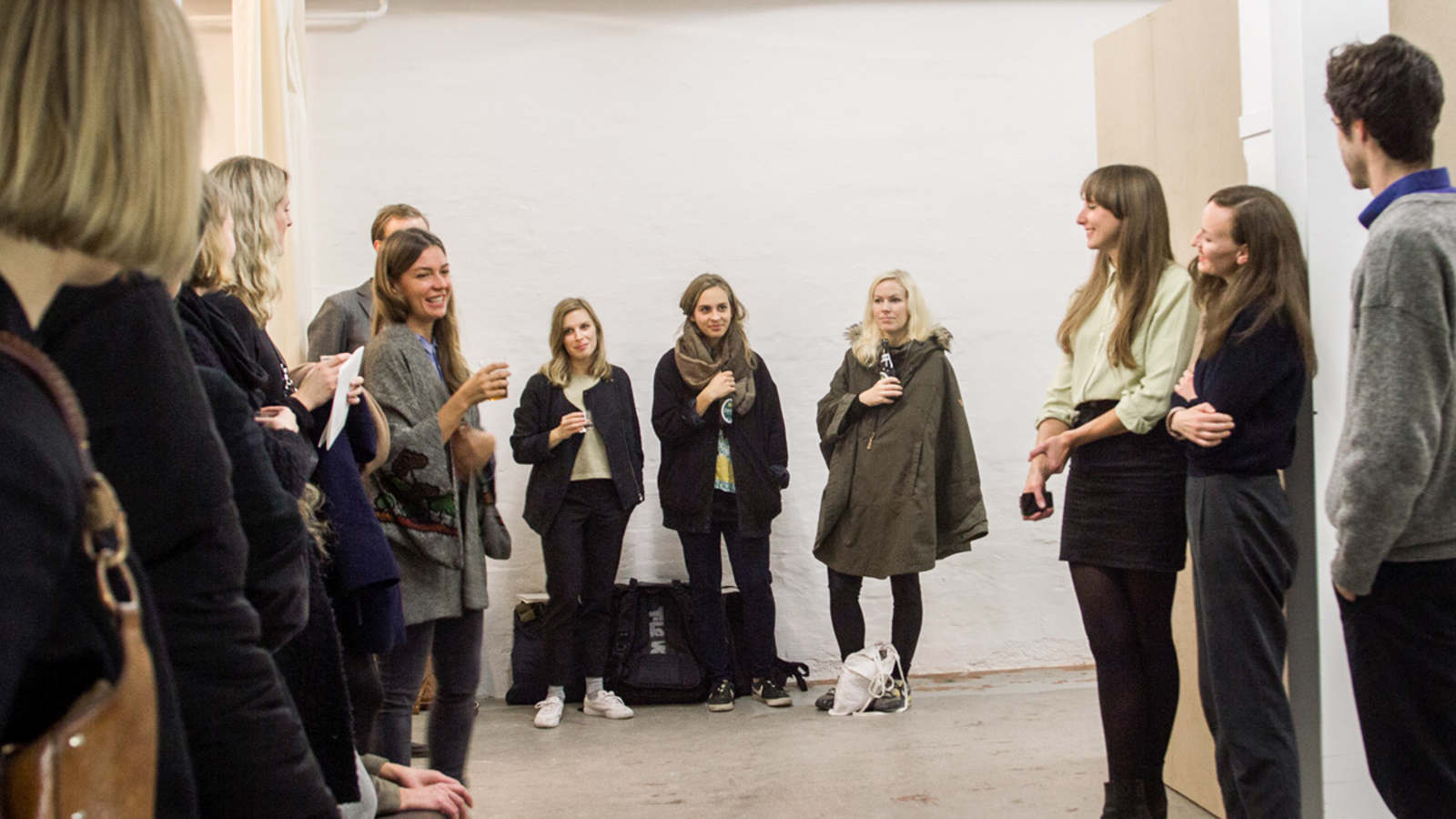 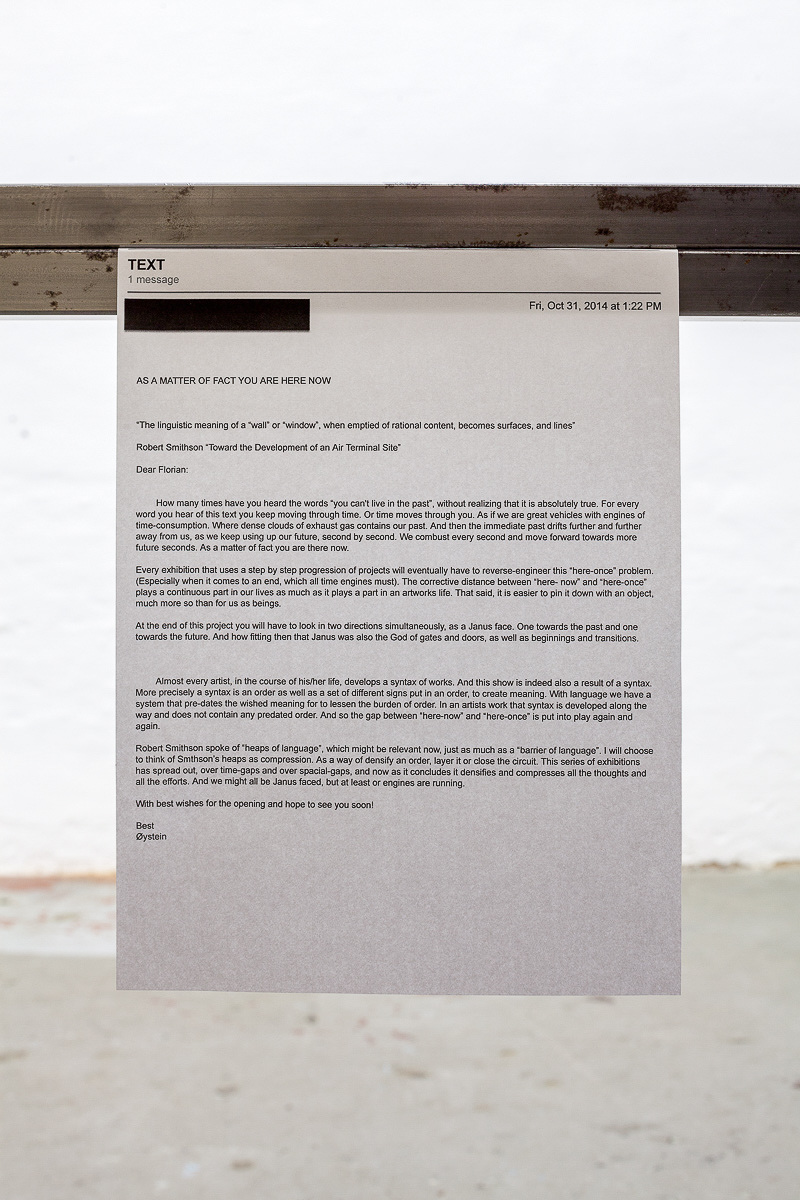