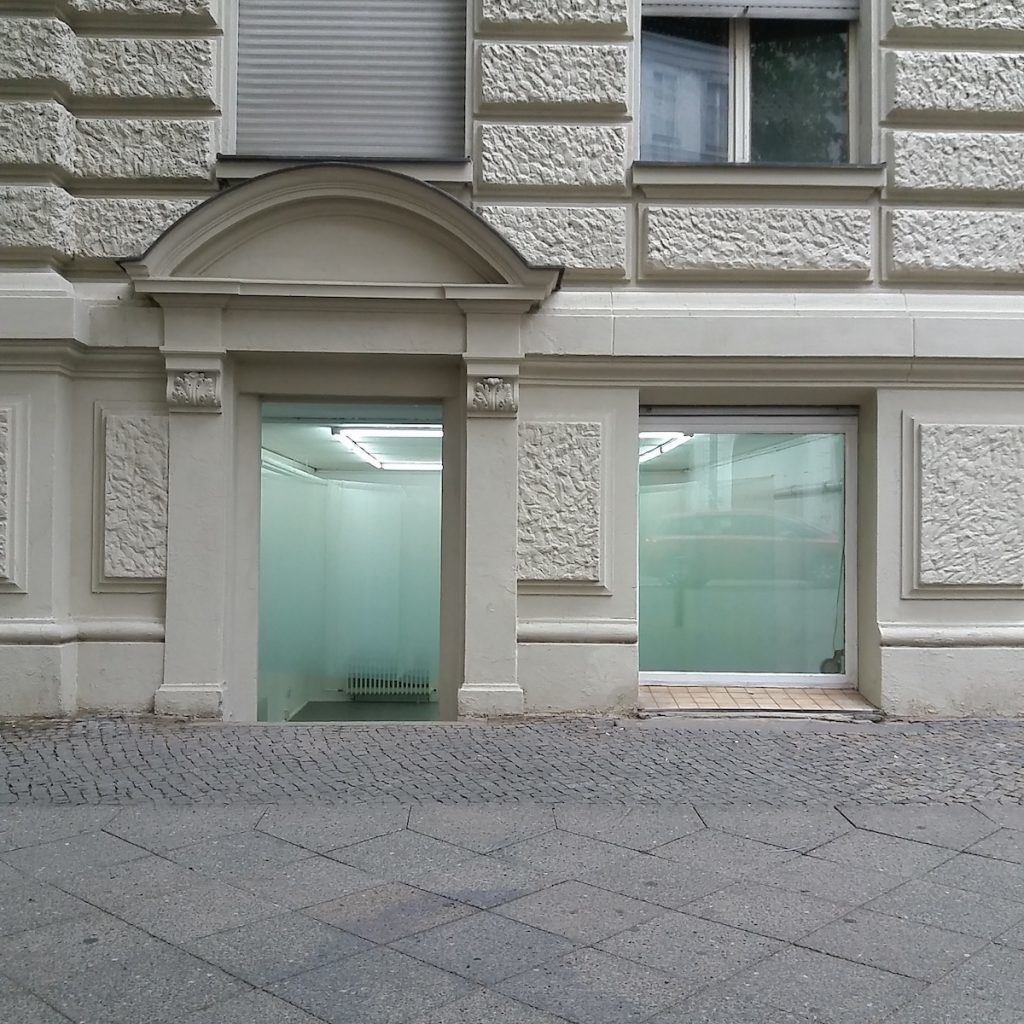 In  V e r t i c a l  D i s p l a c e m e n t  insitu’s exhibition space is divided between two artists with an imagined horizontal line following the level of the street and top of the stairs that lead down to the first room. New artworks by Luca Vanello occupy the lower part of the space, while a site-specific textile installation by Akane Moriyama occupies the space above street level. This shift from the typical plan-based division of space to the vertical plane refers to the situation of insitu’s project space, placed in a basement partly below ground, but it is also an organisational principle that may open up to a different experience of the site and the display of artworks.

The site-specific approach is a returning gesture towards the insitu team, who took the name ‘Another Space’ on as theme for their exhibition in our project space in Copenhagen in 2014. The ‘in situ’ is usually associated with being settled, rooted and permanent, something that can exist only in a specific place at a specific time. In the show, we wish to challenge this idea of the in situ by also bringing into play the idea of the ex situ, a term freely adapted from the discipline of conservation of endangered species, by showing work that is both in place and displaced, between being there and not there.

A k a n e  M o r i y a m a’ s  installation occupies the entire front room, creating a series of spaces in which visitors pass through to reach the back room. Through layers of partly transparent, hanging silk we fade in and out of view to each other, as different parts of the rooms become visible and invisible to us. The thin threads barely hold the blue and yellowy dye, also fading from bottom to top, creating the illusion of weight where there is hardly none. Moriyama’s intervention is simultaneously massive and light, filling and splitting large chunks of the architectural space in the softest manner. The textile is barely there in terms of mass, yet creates remarkable difference in our experience of the space.

L u c a  V a n e l l o  presents new works that deal with fading life and intimacies, using material and narratives from hospices in Berlin. A digital image of a charged site of the hospice has been altered by inserting text in its binary code and printed directly on an entire wall, before being partly sanded down. On the floor, a composition of yellow zincked structures function as containers for manipulated, white plants. The solution used to process the plants has erased the chlorophyll from the leaves, but the energy is still preserved in them, in this way pausing a moment in their cycle. The plants’ arrangements are translations of patients personal narratives, which is the result of a collaboration with a plant therapist. The wall image and the various objects have all gone through a process of transformation and insertion into a new context, finding themselves in a state of limbo, frozen in a transformational state between two places.

i n s i t u  is a non-profit space for contemporary art in Berlin, founded in November 2012 by the curators Marie Graftieaux, Nora Mayr and Gilles Neiens and was enlarged 2014 by the participation of the curator Lauren Reid. The two-room souterrain is located at Kurfürstenstrasse 21-22, in the middle of the new gallery district of Berlin-Schöneberg. The name insitu refers to the curatorial team’s understanding of curatorial practice as being necessarily »in situ« in terms of cultural, social and geographical spaces. The exhibitions are complemented by talks, performances, lectures and video screenings. Website: http://insitu-berlin.com/