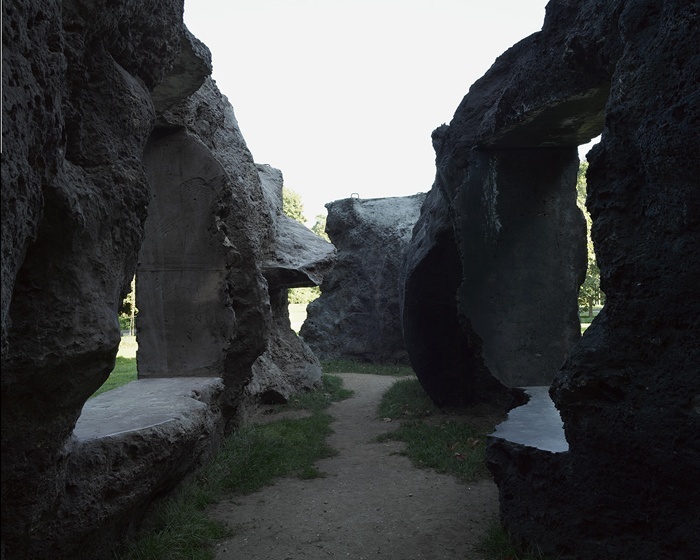 Batara is a collaborative project between architect Anne Holtrop and photographer Bas Princen, which consists of a series of models, a full-scale pavilion and photography. The spaces of Batara are arrangements of sand-cast walls without windows, doors or roofs, only empty openings. The constructions have no apparent function or relation to typology or building style, giving an air of something prehistoric and primitive. It is as if we are looking at a disintegrating ruin bearing witness of some fundamental form of building.

The project indeed originates in a visit to the ancient city of Petra in Jordan. The simple settlement of single-story dwellings eventually became a hub for the caravan trade between Persia, the Arab world and the Roman Empire, and a great city was carved out of the desert rock. Princen’s photography of Petra display spaces that are moving between states of natural and man-made: the rugged surfaces of the mountains were cut sharply and ornamented to house tombs and temples, while today the details and surfaces are eroding away and gradually blurring the distinction.

The walls of Batara are in a similar manner created in a process of removing material, by digging away from the natural environment. Concrete or plaster is poured directly into pits of earth or sand, giving the walls a smoothness on one side and a rough, uneven surface on the other. The process and the outcome are characterized by the combination of intent/constraint and chance/the undefined, where the architecture is partly formed by the material and the natural mould itself.

In his text, Material Gesture (1), Holtrop points to the importance of the material properties and the unintended effect of an action with a material, as a possible new approach to making. Much like Robert Smithson’s Asphalt Rundown (1969), Batara explores how the outflowing properties of concrete work together with the earth mould, with gravity and air to level and solidify. And like Smithson, Holtrop points out that the truth of a material is not found in it’s refined, ideal state, but in the “impure”, worn and lopsided state. In “A Sedimentation of the Mind: Earth Works”, Smithson argues that rust is the fundamental property of steel, and that our fear of inactivity, entropy, erosion and the undefined is removing us from the primary process of making contact with matter, and thereby fully understanding and interacting with the world.

In their work, both Holtrop and Princen point to examples in which architecture and the natural environment consist of the same material, making it specific to place and partly undifferentiated from its surroundings. Batara is, like many of Holtrop’s other projects, a mono-material architecture. Using a single material is a way to create a reduced architecture, which feels like a scale-model or seems unfinished. It is an architecture of suggestion and possibility, where the idea is simultaneously clear and open. The structures of Batara may be undefined in terms of their use or what they are about. Yet the reduced state allows us to focus on what this architecture actually consists of, on the qualities of the material and the interaction with it in the process of making, the sequence of spaces and connections between them. Princen’s images of the Batara models only show us fragments of the space, confusing our sense of scale and placing us inside the model. Yet even without a sense of the whole the essence is apparent, and we are invited to imagine what this possible architecture could become.

Anne Holtrop (b. 1977) graduated from the Academy of Architecture in Amsterdam in 2005 and is currently based in Amsterdam and Bahrain. He is course director of the Master Studio for Immediate Spaces at the Sandberg Instituut in Amsterdam, and was editor of OASE, an architectural journal for architecture from 2005-2013. He has been awarded several grants from the Mondrian Fund, as well as receiving the 2008 Charlotte Köhler Prize for Architecture from the Prince Bernhard Cultural Foundation.

Holtrop’s work ranges from models to temporary spaces and buildings. He often begins outside architecture, with a gesture or a form that is tested to find out what it can bring to architecture or how it could become architecture. In a sort of reverse process the intuitive work with spaces, materials and construction methods provides the base for the program and use of the architecture, and is often left open to the user. 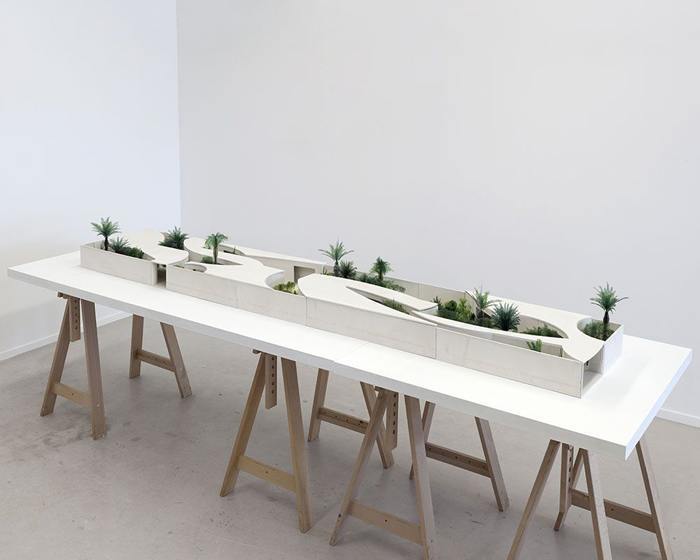 Bas Princen (b. 1975) graduated from the AIVE Eindhoven design academy in 1998, and later studied Architecture at the Berlage Institute and Laboratory for Architecture in Rotterdam. He works mainly through architectural photography, which is widely exhibited and published, as well as in collaborative projects with architects. Bas Princen won the 2004 Charlotte Köhler Prize for promising young artists and architects, and the Silver Lion award at the 2010 Venice Architecture Biennale for his collaborative work with OFFICE Kersten Geers David van Severen.

Princen’s work is concerned with our changing contemporary urban and natural landscape, and what this tells us about human civilizations. In his photography the boundaries between the natural and the man-made are blurred, as if suggesting that it is one and the same and we have put up a false distinction between ourselves and our surrounding environment. It is unclear whether the landscapes he presents are being constructed or destroyed, and whether they convey our past or our future.

Utopian Debris: A Conversation between Bas Princen and Marc Pimlott