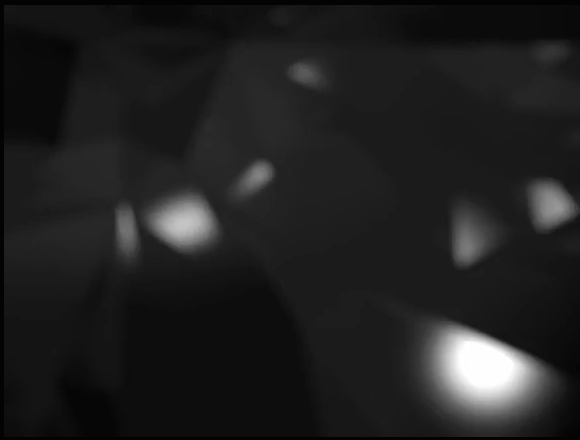 In a dark and empty space, an object appears in flashes, spinning in and out of view, sliding in and out of focus. The shape changes in its rearrangements and reveals its crystalline structure through twirls and flickers of light from an unknown source. There is no sound.

Ann Lislegaard’s series of animations is generated from a single salt crystal borrowed from Robert Smithson’s work Eight-Part-Piece (Cayuga Salt Mine Project)  from 1969. It consists of piles of salt supporting eight square mirrors, forming a seriality that is echoed in Ann Lislegaard’s animation, where we see the salt crystal repeatedly from different angles in an almost meditative sequence. Smithson was interested in the virtuality of the crystalline, with it’s ability to break up space in a multiplicity of directions and representing a fractioning of time, where “past and future are placed into an objective present”.

The salt crystal, already once removed from its original site underground, is given a new digital existence in Lislegaards typical grey-scaled universe. Here, we find ourselves in a space that is atemporal, infinite, scaleless and non-gravitational. In this utopian space of possibilities and transformative potential there is still a tension between the virtual and material, between site and non-site. Like something out of science fiction, Lislegaard’s speculative animations challenge our understanding of the constant rearrangements and fluidity of both the natural world and our conceptions about the possible future.

Ann Lislegaard is a Norwegian artist based in Copenhagen, Denmark. She works with 3D animations, video, sound, architecture, installation and photography. The works often take their outset in science fiction, literature, art history or feminist theory, and take form as sensory interactions with the spectator and fragmented, multi-layered narrations.

An unmiraculous place where anything can happen: alternative temporality in the work of Ann Lislegaard by Claire Barliant

In Visions, extra-cultural surprise and the status of utopia in Ann Lislegaard’s work by Lars Bang Larsen

Entropy and the New Monuments by Robert Smithson

A Provisional Theory of Non-Sites by Robert Smithson